NEW YORK, Dec. 6, 2021 /PRNewswire/ — 1091 Pictures has released the official trailer for Maya & Her Lover. The feature was nominated for the Fan Favorite Award following this year’s American Black Film Festival. The honor comes as writer/director Nicole Sylvester closes the year having screened her debut feature film at some of the most coveted festivals across the country. It will now bow for a digital release on December 7, 2021. Maya & Her Lover are available for pre-order HERE. 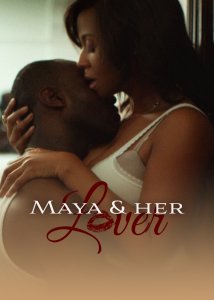 Maya & Her Lover offers a perspective on love and romance that is rarely told: the tale of a woman who daringly goes against everything she believes about love, in search and favor of herself. As Sylvester’s new feature opens, the eponymous lead character – played by Ashanti J’Aria – is a 39-year-old woman stifled by complicated memories of her overbearing father and on the verge of becoming a recluse, begins a sexual relationship with a much younger man who at the ripe age of 22 is unsuccessfully attempting to overcome his past. While he serves as the catalyst for Maya’s evolution, her love interest Kaseem (Shomari Love) is never quite the center of the story the way she is. As the title implies, this is squarely Maya’s story, something we don’t often see in Black romances. In that regard, Maya & Her Lover is a coming of age story of sorts, crafted for a generation in constant redefinition of the rules.

“Sharing ‘Maya & Her Lover‘ with the world is a dream come true. I’ve spent over a decade in the industry helping others achieve their dreams and this was the opportunity for me to realize my dream of directing. With a shoe-string budget, I was able to bring my own personal narrative to the screen. We gathered a great cast, crew and production team – who were all willing to support my vision by spending 12 long, hot days in Brooklyn to bring ‘Maya & Her Lover’ to life. It’s been a journey and this release feels like a celebration,” said Nicole Sylvester.

“Nicole is the definition of a success story and her work ethic is evident in the quality of the projects she directs,” said Greg Maurice, 1091 Pictures Director of Acquisitions. “As a former intern and assistant who has worked on several mainstream TV shows and films, she has put in the work to build her experience and vision. The result of her tenacity is the release of her first feature film, ‘Maya & Her Lover.’ Her film highlights the topic of love through the perspective of a Black woman, a narrative that is uncommon in most films. Though her film has been featured in several festivals, I’m confident this is only the beginning of Nicole’s success as a Director.”