Making of the ‘Grammy kid’ 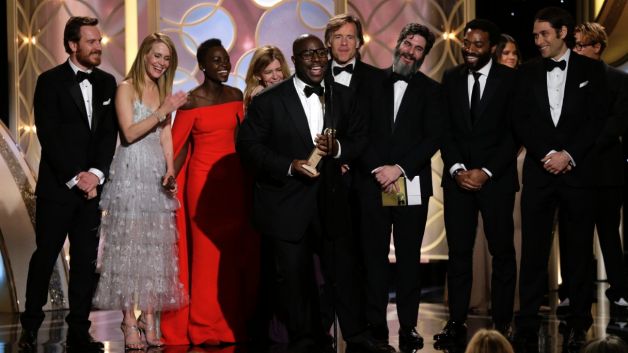 12 Years a Slave took home the biggest award of the night at the Golden Globes, winning Best Motion Picture, Drama. Steve McQueen accepted the award on behalf of the film, and was joined on stage by his cast and crew, including leading man Chiwetel Ejiofor and supporting actressLupita Nyong’o, both nominees.

It was the only win of the night for the critically-lauded film, and, in fact, the only win for Black talent at the Golden Globes this year. Nominees Kerry Washington (Best Actress for Scandal), Idris Elba (a double nominee for Mandela: Long Walk to Freedom and Luther), Don Cheadle (House of Lies), Nyong’o and Ejiofor (also a double nominee for 12 Years and Dancing on the Edge) were shut out from wins.

Highlights of the awards show, hosted by Tina Fey and Amy Poehler, including a touching tribute to the late Nelson Mandela by Bono and The Edge of U2 (the group won Best Original Song for “Ordinary Love” from Mandela: Long Walk to Freedom).

Usher and Diddy took the stage to present the award, along with the one for Best Original Score, which went to Alex Ebert for All is Lost. Diddy publicly congratulated Ebert for the win before handing him his award, saying, “a few years ago you were hanging out on my boat in St. Bart’s, and now you’re here.”

Though she lost out on a win — again — for her leading role in Scandal, Kerry Washington was positively glowing on the red carpet. The very pregnant actress is sure to win some Best Dressed prizes for her elegant look.

Paula Patton looked radiant, if not a bit overwhelmed by her couture gown, as she presented withAaron Eckhart. And Zoe Saldana broke out her Italian when presenting the Best Foreign Film prize to The Great Beauty.

For the original report go to http://www.bet.com/news/celebrities/2014/01/13/12-years-a-slave-wins-best-picture-at-golden-globes.html