Legal Aid Council Ensuring Access to Justice for All

35,000 Pieces of Furniture Being Distributed to Schools 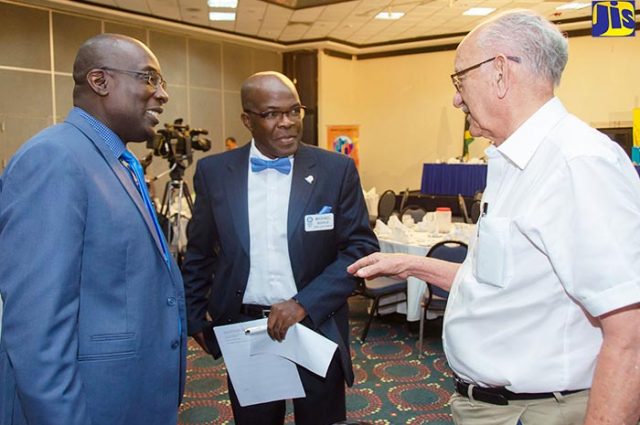 Education, Youth and Information Minister, Senator the Hon. Ruel Reid (left), enjoys a light conversation with President of the Rotary Club of Kingston, Michael Buckle (centre), and Past President, Michael Fennell. Occasion is the Rotary Club’s luncheon held on August 31 at The Jamaica Pegasus hotel in New Kingston

Minister of Education, Youth and Information, Senator the Hon. Ruel Reid, says some 35,000 pieces of furniture are being distributed to primary and secondary schools in order to ensure that all students are adequately accommodated for the new academic year.

“We decided this year to start the procurement process early, so we started from November. This is the first time that we were able to deliver furniture as early as mid-July, so we are way advanced,” he noted.

He informed that the acquisition was made possible through an expanded budget of $200 million, up from $75 million.

“We are ready for the new term. We don’t expect that furniture will be a major problem,” he said.

Senator Reid was speaking with JIS News at a Rotary Club of Kingston luncheon at The Jamaica Pegasus hotel in New Kingston on August 31.

Meanwhile, the Minister said the Zones of Special Operations (ZOSO) will play a critical part in ensuring regular school attendance.

He noted that the zones will normalise communities and allow free passage for children to go to school.

Senator Reid said that the initiative was developed to restore and maintain peace in volatile areas and enable the police to provide service and reassurance to the public and greater protection for children in particular.

“I see the special zones as an aid to our Ministry to ensure that all our children are able to get to school and get the education that we want them to get,” he asserted.

The zones will address crime and violence, while upholding the rule of law and protecting citizens’ fundamental rights and freedoms.

Communities where zones have been established will benefit from social interventions and other provisions.