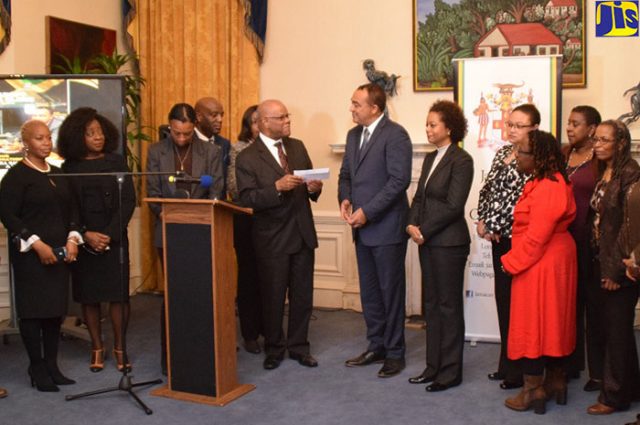 Jamaica’s High Commissioner to the United Kingdom (UK), His Excellency Seth George Ramocan, (6th left), presents Minister of Health, Dr. the Hon. Christopher Tufton (centre), with a cheque for $5 million for the Ministry of Health’s Adopt-A-Clinic initiative. They were at special event hosted at the Jamaican High Commission in London recently. Observing is Attorney General, Marlene Malahoo Forte (9th right), and other stakeholders.

Approximately $5 million has been raised by the Diaspora in the United Kingdom (UK) for the Ministry of Health’s Adopt-A-Clinic initiative.

The funds were handed over to Portfolio Minister, Dr. the Hon. Christopher Tufton, at a special event hosted at the Jamaican High Commission in London recently.

The Adopt-A-Clinic Project, is one of the Jamaica 55 UK legacy projects, undertaken by the High Commission.

The funds were raised from two major events organised by the High Commission, namely the Jamaica 55 Independence Church Service, as well as the Jamaica 55 Gala Dinner and Dance.

Several other individuals and charities also raised funds and donated equipment under the UK Legacy project, which was coordinated by the Adopt-A-Clinic (UK) Subcommittee.

The funds that have been raised so far will allow for the adoption of at least five clinics across the island.

In his remarks, Dr. Tufton thanked the UK community for supporting the project, noting that the Diaspora has led the charge for the initiative.

“Adopt-A-Clinic is about boosting primary and preventive health care by engaging in a wider and more elaborate way to recognise the importance of these facilities and by encouraging (communities) to use these facilities,” he said.

“We are aiming to restore credibility to our health clinics, by ensuring that they have the necessary facilities in both personnel and equipment, and use the restored image to encourage community participation,” Dr. Tufton added.

Meanwhile, High Commissioner, His Excellency Seth George Ramocan, expressed appreciation to the groups and individuals that assisted in raising the funds towards the Adopt-A-Clinic Project.

He reiterated the High Commission’s commitment to continue to raise awareness, as well as funds, towards this important cause.

Persons present at the handover ceremony included: Attorney General, Marlene Malahoo Forte; members of the Adopt-A-Clinic Subcommittee led by Paul Harrison; and representatives of the Nurses Association of Jamaica (UK).