Mariah Carey: Working on American Idol Was “Like Hell” 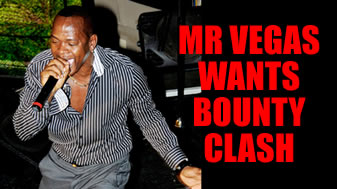 Dancehall/reggae artiste Mr Vegas has signalled that he is willing to clash fellow dancehall act Bounty Killer at Sting this year if he is put to the test.

The veteran singer, who released a song called Bury Him Fuss this week, which extended a lyrical war invitation to Bounty Killer, says he will not allow Bounty Killer to ‘cow’ him down.

“I just put it out there to let it be known that mi a big man now and mi nah mek nuhbody feel like dem can cow mi down,” Mr Vegas said.

The artiste says clashing has never been his thing, however, he knows about clash culture and is willing to show his skills at Sting if Supreme Promotions is interested. He also said he would turn down his show in Dubai on the same night, just to prove his worth against his opponent on the show dubbed the Greatest One Night Show on Earth.

“I grew up around sound system, I know all about clash, but that is not my thing. I respect clash like when Papa San and Stitchie, Shabba and Ninja, Super Cat and Ninja, Cobra and Buju,” he said.

“Clash is to entertain people with lyrics, not bag a noise and nasty mouth. So, if a man come wid some fresh new lyrics, then mi wi cancel my show a Dubai and mek Laing run back the promoter food, just to show people sey mi can tek on Goliath,” the Nuh Fren and Tek Wey Yu Self singer said.

Attempts to get a response from Bounty Killer were unsuccessful as persons close to the artiste said he did not wish to comment.

Since the release of the song, Bounty Killer fans have flocked YouTube.com to defend him. Some have even gone as far as to warn Mr Vegas of the repercussions of challenging Bounty Killer in his very familiar territory.

“Stick to you gyal song it bad still ,but stick to the evil weh you know,” YouTuber Carson Waite warned.

Bury Him Fuss was produced by Mr Vegas.

‘Mi can tek on Goliath at Sting,

‘Mi can tek on Goliath at Sting,

For the original report go to http://jamaica-star.com/thestar/20131114/ent/ent1.html