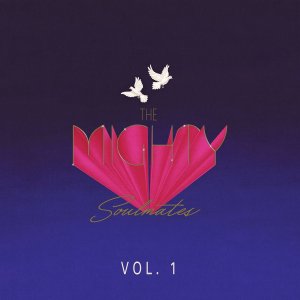 Time, and The Family), and Gardner Cole (who’s penned songs for Cher, and Madonna) got together for weeks of recording sessions that almost no one knew existed until now. “We were there for kind of a fantasy music summer camp at Cole’s house,” Murphy recalls.  “We had all worked together in the past, in some form or another, so everyone was excited to see what we could create together.” As The Mighty Soulmates, 14 of those tracks are finally revealed on the new album, VOL. 1 (Mod Squad), that is now available on all digital music platforms.

Silk Sonic has sparked a global retro soul revival, so the Mighty Soulmates have surfaced at the right time. The set is a balance of musical moods reflecting their eclectic influences. While “Hollywood” and “Tied to Your Pocket” are reminiscent of the `80s Minneapolis Sound, “Get Down” is a nod to James Brown and “Get Up Get Off” is a wink at Stevie Wonder. The Soulmates share leads on the New Jack Swinger, “Gonna Love You Right” while Peterson croons the infectious Pop groove, “I Wanna Be the One.” Members of the group wrote all of the songs with the exception of their funky cover of The Temptations’ “Ball of Confusion,” a 1970 classic. “It only took us a few weeks,” Cymone recalls. “We just kind of jammed and eventually came up with a song, pretty much finishing it on the spot, and then moved on to the next song.”

The sessions ended when Cole’s Southern California home was damaged during the 1994 Northridge Earthquake. Although, there was enough material for two albums, none of it was ever released. “I’m honestly not sure what happened,” Cymone sighs. “I think with all those talented artists, they probably got busy and drifted back into their commitments. I know my life at that time was insanely crazy.” Peterson adds that, “I believe we shopped it, and nothing really happened with it. We all led busy lives and it just sat there, marinating like a fine funk masterpiece.  Everything has its right time and now might just be the time.”

Tony Prendatt, a GRAMMY® Award winning engineer (Lauryn Hill, Carlos Santana), who has released the project through his Mod Squad label, thinks so too. “Mic Murphy and I are old friends,” he says. “I heard the project for the first time a couple of months ago. The gentlemen, their talents and achievements are self-explanatory.  As a collective, The Mighty Soulmates is an inspiring musical work for the planet. But, most importantly, they are good, personable individuals on the verge of a resurgence.”