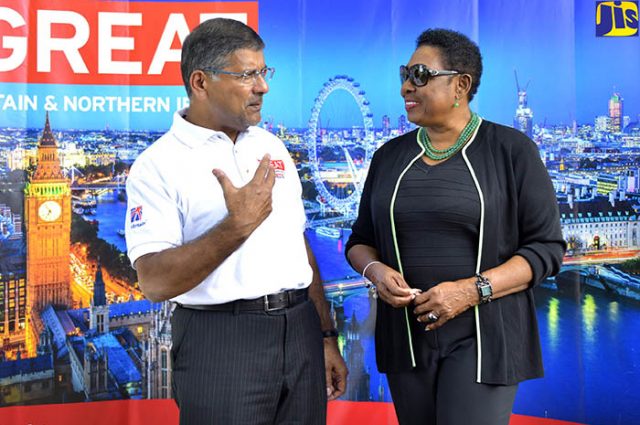 Culture, Gender, Entertainment and Sport Minister, Hon. Olivia Grange, says a series of events will take place to mark the 50th anniversary of reggae music in Jamaica and the 70th anniversary of the Empire Windrush voyage.

The Windrush was the first of many ships that carried hundreds of Jamaicans to help with the rebuilding of the United Kingdom (UK) in the aftermath of the Second World War. This year also marks reggae’s recognition as a music genre that began in 1968.

Ms. Grange was speaking at the launch of the UK/Jamaica Fair and the Songs of the UK in Jamaica competition held at the British High Commission in New Kingston on February 12.

The Minister noted that as part of the celebration to recognise these milestones, the Ministry will be collaborating with “Live Nation (Entertainment) in the United Kingdom to stage the events”.

Live Nation is the largest live entertainment company that manages concert promotions, venue operations, sponsorship, ticketing solutions, e-commerce, and artiste management, and is located in Europe, the Americas and other parts of the world.

“We will stage an event at the docks in Kingston on May 28, a series of reggae concerts in London (England) on the weekend of June 23 and a major exhibition from August to November this year in London,” the Minister noted.

“We have also planned film festivals, seminars and a number of other events. We’re also speaking with the Mayor of London (Sadiq Khan) in this effort,” Ms. Grange added.

The UK/Jamaica Fair, which is being held on March 3, is part of efforts by the United Kingdom to demystify the happenings behind the walls of the British High Commission.

“As a Mission we need to do more of our work in public, so we’re holding an event where we will invite 500 or 600 people in various phases of the day… and use social media to project out what is going on that day,” said British High Commissioner to Jamaica and The Bahamas, His Excellency Asif Ahmad.

“We (UK) really want to rekindle the desire to do more with each other, whether it’s to have British educators come over here; whether it’s through the Chevening Scholarship, where we’re looking to send another 14 Jamaicans to do their master’s fully paid… and to really link in the Jamaican economy, that what are made and produced here, there is a real market for them in the UK,” he added.

Mr. Ahmad pointed out that a few companies have expressed interest in coming to Jamaica such as Shell, to pursue its liquefied natural gas business and lubricants.

As part of the fair, resident Jamaicans, aged 18 and older, are being given an opportunity to enter the Songs of the UK in Jamaica competition, which will require them to cover a British song before uploading it to YouTube.

Deadline for the submission is February 16 and the winner of the competition will be awarded two plane tickets, courtesy of British Airways.

The competition is being led by the Jamaica National Group, which is a sponsor of the fair.