HOLLYWOOD, Calif., Sept. 1, 2021 /PRNewswire/ — Joining the pantheon of multi-hyphenate black women taking the world by storm, actress/producer Chrystee Pharris (Amazon Prime’s Season 3 Goliath, NBC’s Passions, Scrubs) adds film director to her resume with the provocative short Aimee Victoria, that is turning into a film festival favorite. The project about two deaf women in love facing a relationship crisis was shot completely under the restrictive guidelines necessary during the height of the COVID-19 pandemic last year, which meant working with a cast and crew from 8 countries and 26 cities completely on Zoom! Aimee Victoria proved to be one of the most unique and challenging directorial debuts ever faced by a first-time director, says Pharris, who also returns in the third season of the cult hit, Craig Ross Jr‘s Monogamy, premiering on ALLBLK & Amazon Prime September 2. 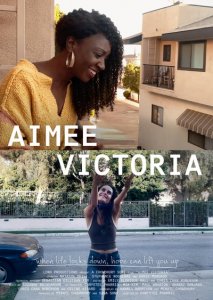 Pharris admits she was a little intimidated and initially reluctant to take on the daunting prospect. “When creator Mikail Chowdhury & producer Sana Soni asked me to direct Aimee Victoria, which is a single episode of the 7 episode web series, Myth of Control, they told me they decided to film everything over Zoom, with an iPhone!” recalls the actress, who’d previously only directed stage plays and musicals. “To be COVID safe, no one would meet in person…not me, not the crew, nor the camera person…it meant the actors would not be acting together in person nor at the same time even though they may be in the scene together! And for the episode that I was chosen to direct, both of the actresses are deaf. How do I direct deaf actresses via Zoom, when I don’t know sign language? How do I communicate what I want from them emotionally, physically? Thank goodness for Google Meets! We used voice recognition closed captioning – I spoke to the actors, they read my directions and responded back with their voices or by typing messages.”

In the end, Pharris says Aimee Victoria turned out to be a blessing for all involved and she is thrilled with the outcome.

“If I hadn’t tried, Aimee Victoria would not be in 14 film festivals (list of film festivals below) around the world and the numbers are growing!” She has fascinating tales to share about overcoming the obstacles of shooting a film completely over Zoom via iPhone — and with two deaf stars! “The actresses, Natasha Ofili and Stephanie Nogueras were incredible. Two deaf women of color and a LGBTQ storyline? How often do you see that on the screen?”

Pharris, who plays Diandra on Craig Ross Jr‘s Monogamy, premiering on ALLBLK & Amazon Prime for its third season, says her fan base grew exponentially after the show was sold to Netflix internationally. “I didn’t know this indie project was going to turn into such a cult hit. Fans from around the world are hitting me up on social media. This season is fire.”