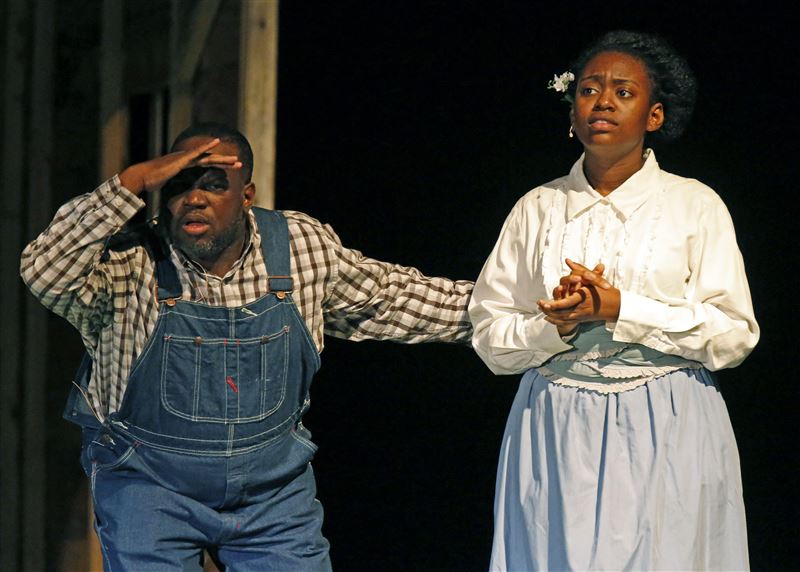 NATCHEZ, Miss. _ All around Greg Iles is his handiwork _ a play where the bestselling novelist chips away at the myth of the Old South, at the same time that his daughter Madeline, in crown and gown, is being feted as a member of the Confederate Court, a pinnacle of white society in Natchez.

But this Friday night in March, Iles is being tortured by the struggles of volunteer sound operators.

Though the pain of his amputated leg has spiked from overexertion brought on in part by his reworking of the Historic Natchez Tableaux, Iles bounds upstairs through the city auditorium audience to discover why the microphone of a singer isn’t on.

From big themes to smallest details, Iles has put his stamp on the pageant, performed ten times concluding Saturday as part of the Natchez Spring Pilgrimage. That tour of pre-Civil War homes and plantations anchors the local tourism industry, an economic foundation of this southwest Mississippi town.

Until this year, the event founded as the Confederate Pageant depicted a fairy-tale view of pre-Civil War Natchez, concluding with a king in Confederate grey promenading with a debutante queen to the strains of “Dixie.” Iles took part repeatedly growing up, one year sprinting the Confederate battle flag around the auditorium.

“It was obvious that the pageant was an unapologetic celebration of the slaveholding South,” Iles said. “It was really a miracle that it had survived into the 21st century.”

Iles had called for changes to the Tableaux in a 2009 speech where he urged community leaders to rethink a number of issues. That was a different Iles, before the 2011 car wreck that mangled his body and led doctors to amputate his right leg below his knee. But the post-accident Iles wrote his most ambitious novel yet, an acclaimed 791-page doorstop titled “Natchez Burning,” a fictional exploration of white supremacist violence in and around his hometown during the 1960s.

So her father’s creative flame still burned hot when the Pilgrimage Garden Club asked Madeline Iles, a junior at Millsaps College in Jackson, to be one of the Tableaux’s two queens. The show is put on by more than 200 volunteer actors, stagehands and costume wranglers.

The history major was honoured, but reluctant to reign over an event blind to the African-American perspective.

“When I was younger, I kind of went along with the Tableaux,” she said. “As I got older, I realized it didn’t really show both sides of the story. I realized how kind of backward the whole thing was.”

Madeline Iles sought changes to a pageant that was dying, losing money in recent years as audiences dwindled. A new generation of garden club leaders was receptive, knowing Greg Iles’ involvement would be a draw.

“That’s why we’re here, because we wanted to see this tradition continue, and it was going south,” said Fayla Guedon. She and Kristen Jordan organized the show this year.

With weeks to go before the March 6 opening, Greg Iles plunged into a feverish remake. He ditched many old scenes and added ones focusing on the realities of slavery, plus a new closing scene where defeated Confederates limp home to find female relatives doing field work once reserved for slaves.

Blacks once played play mammies and “happy slaves,” in the Tableaux, but deserted amid the Civil Rights movement in the 1960s, leaving the show all-white.

Some black roles had been added in recent years, but organizers needed more black actors for parts Iles wrote. A garden club member approached Beverly Adams, a local actress. Adams, who is black, said she had never attended the Tableaux because “it was something that our community viewed as glorifying slavery.”

But after meetings with organizers and Iles, Adams signed on and began the tricky job of recruiting other African-Americans. At first, Adams told the mother of 17-year-old Deanna Hayden, marked to play a slave bride and mother, that Adams had “a part” for her.

“I didn’t know how to break it to her,” Adams said, that the role was in the Tableaux.

Hayden said she found her role emotional and “bittersweet,” confronting that slavery built the grand houses that draw visitors.

“You don’t want to remember your people having to struggle through so much,” she said. “At the same time, it’s kind of a rejoicing. You’re happy that Natchez is trying to preserve their legacy to teach people.”

This year’s Tableaux succeeded, nearly filling the auditorium some nights. There are still unresolved tensions, though. Iles has his eye on more revisions, although Guedon and Jordan said they’re happy with the production as it now stands. Plus, African-Americans haven’t breached the pilgrimage’s inner sanctum _ debutante courts remain all-white.

But in a town obsessed with history, Natchez is now telling a different story about its past.

“My goal is this will be a model for racial co-operation in Natchez, and that is no small thing,” said Greg Iles. “That’s how you change things.”