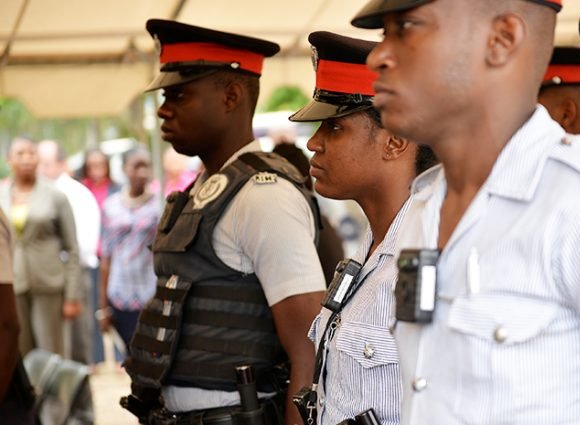 There has been some attempts at accountability following the damning Tivoli Report that highlighted extra judicial killings by the security forces, especially the police, during the May 2010 incursion into Tivoli Gardens, a known JLP enclave. It is widely believed that 69 to 76 mainly unarmed citizens in Tivoli Gardens were killed during that bloody operation.

One such initiative has been the launch of a pilot project involving the wearing of 120 body worn cameras by front line officers in crime invested sections of the country.

Jamaicans For Justice (JFJ), a local human rights watchdog, has welcomed the launch of the body cameras. The group feels these body worn cameras will provide “accountability and transparency” in Police dealings with the public. JFJ has warned the leadership of the force to exact harsh penalties out to those who choose to tamper with the devices.

Terrence Williams, INDECOM’s Commissioner has welcomed the introduction of the body worn cameras. Any tool that helps INDECOM to get to the “truth” so and to better justice will be welcomed.

There are concerns as to the integrity of the information gathered. For example a source in Toronto, Canada advised that officers there have damaged body worn cameras and claim it happened in a tussle with suspects or during an eventful arrest or foot chase. They are suspected of manufacturing all types of reasons which have rendered the cameras as inoperative. How do you win with shady characters who are supposed to be upright. These cameras can help to protect the officer’s integrity, should a lie is being concocted against them … it can be a two edged sword. Think about it … another side of the story.

We will have to wait and see.