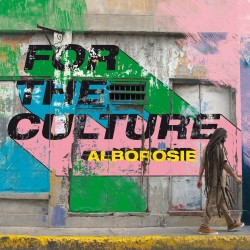 The 14-track production covers themes of cultural pride as evidenced in the title track “For The Culture,” triumph over hardships created by the pandemic (“Unprecedented Time”), the relief and ease some experience when they add marijuana to their meditation (“Never Let Me Down”) and the love shown while helping a loved one out of a difficult time (“Out Of The Darkness”).

All songs were written, produced, and performed by Alborosie using vintage analogue gear, dub sirens, reel‐to‐reel tape, and live instrumentation. Guest performers on the project are Collie Buddz, Jo Mersa Marley (“Ready”), Quino of Big Mountain (“Where Do You Go”) and Wailing Souls (“Life To Live”). The release is accompanied by multiple music videos for the focus tracks and singles with a series of visualizers dubbed ‘Visual-i-Jahs,’ conceived and directed by Alborosie and long-time creative partner Tony Fisher, to support the release.

This latest album is a bold statement and an authoritative command all at once – no holds barred – he’s roaring out for the culture. From paying tribute to his adoptive homeland with shouts‐out to Jamaica’s Culture Minister Babsy (Olivia Grange) and Brogad (Prime Minister Andrew Holness) to collaborations with foundation artistes Wailing Souls on a revision of their 1978 hit “(Jah Give Us) Life To Live” we know what Alborosie represents.

Alborosie delivers upfull, hard‐hitting lyrics and distinctive roots rock reggae flavor that seamlessly segue into otherworldly sounds that harken to the original roots and dub masters. Albo (as he is respectfully nicknamed) is well studied in his craft and throughout the listening experience, head nodding riddims and hard‐hitting beats with layers of instruments brilliantly conversing which evokes raw emotional responses.

“Ginal (featuring Collie Buddz)” was the kick-off single to the album For The Culture which dropped on back-to-back Fridays. “Ginal,” is a Jamaican slang term to describe a trickster. The song is illustrated with cutting and humorous lyrics about people who talk too much (‘mouth ah massi’), that they will “smile inna yuh face an’ wah take yuh place.”  To this reality, Alborosie sings “chattings run road like a Taxi / glued to my word like epoxy / no carry news / laba laba / me ah no foxy….”

The collaboration was born out of a mutual respect between the artiste / producers. During a recent media listening session via Zoom, Alborosie shared that he had recently voiced a track that Collie Buddz produced on the CaliRoots Riddm. Collie Buddz, responded that his first time listening to “Ginal” he “could feel it.”

In February 2021, the Alborosie Dub Station studio effects plug-in was released in collaboration with gear maker Audiothing. Since then, Alborosie has recorded several live dub sessions demonstrating or utilizing the device, under the moniker ‘Dub Mechanic’ and uploaded to his Pupaalbo YouTube channel.

Alborosie has teamed with the Government of Jamaica to raise awareness for the issue of Human Trafficking. In 2020 he wrote and produced “Shadows After Dark,” featuring a who’s who of Jamaican vocalists to get the message out. The track has been played on mainstream radio in the U.K., The U.S., Italy, Canada, Germany, and others.