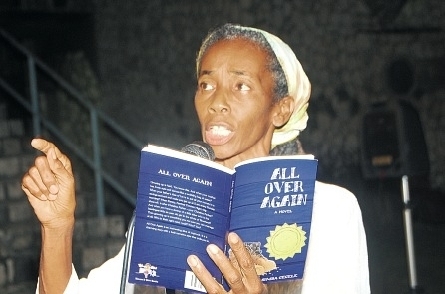 The petite, dreadlocked author draws inspiration from everything and everywhere. Her characters then become a composite of a total sensory experience — what she has seen, heard, tasted, smelled and felt.

Her latest work All Over Again showcases not only her talent fro smelt writing, but also character development. And, at the recent monthly meeting of the Poetry Society of Jamaica held at the Edna Manley College of the Visual and Performing Arts in Kingston, she showcased her great storytelling abilities.

All Over Again was born out of Simba’s desire to give males a voice and emotional outlet.

“As a single parent to a son, I realised that I was losing him as he grew up. I wanted him to be able to stay open and express what he was feeling. But as with young boys becoming men, that ‘maleness’ sets in and he was becoming a little rough around the edges. I, therefore, wanted to give him a level of emotional literacy and so I took to writing — that was 15 years ago — and one short story led to another,” she tells the Sunday Observer.

Simba, who is British-born to Jamaican and Nigerian parents, would then cross paths with publisher Tanya Batson-Savage of Blue Mountain Books who would take her collection of short stories and create All Over Again.

“It was Tanya, who, after reading the first nine of 10 stories, came up with the idea of creating a novel, having seen the potential arc of the stories and recurring characters. She then ordered the stories as if they were chapters and had me fill in the gaps,” says Simba.

She, however, describes the process of working with her publisher as “tough love”.

“I would sometimes get a call from Tanya. ‘A-Dziko Simba, I need another story by the end of the week,’ she would say. I would have no idea where this story would come from. But I strongly believe that I am a vehicle, a channel for messages from the Creator, and so oftentimes, by the next day, I would have a story based on some of the characters that I have walked around with in my head, or something I have seen or heard,” she explains.

At the Poetry Society meeting, Simba read How It All Happens, which chronicles the experiences of a young boy and his not-so-likeable younger sister Mary Janga.

This was well received by the audience at the meeting.

She explains that Mary Janga and her brother are two of the characters who are woven through a number of the stories in the work.

Simba is heartened by the response and support she is receiving for All Over Again noting that it has changed her mindset that Jamaica and Jamaicans do not have a reading culture.

“Everyone is so congratulatory about the release of the book … it has been astounding. People seem genuinely happy at the birth of a book which was written and published here in Jamaica. I have also been getting a lot of interest in the work from young men, which is refreshing and I definitely appreciate that.”

Later this month All Over Again will be released in

e-book format, and Simba is also preparing to record the tracks for the audio version. She sees both these formats as a means of taking her work to the world.

For the original report go to http://www.jamaicaobserver.com/entertainment/All-Over-Again-gets-first-outing_15416686