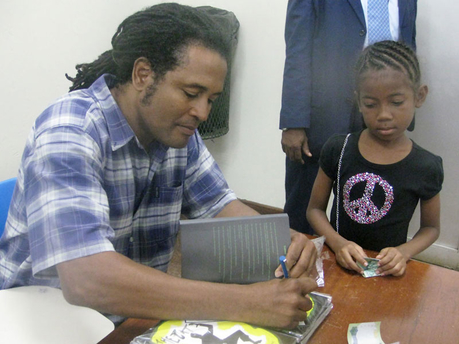 Andrew Francis signs a copy of ‘The Cat’ after the launch of the book at the University of the West Indies (UWI), Mona, on Friday evening. – Mel Cooke

Andrew Francis started drawing comics when he was three years old and, four years later, created a character called The Cat. He created many heroes after that, but The Cat was the only one Andrew’s father, Professor Alfred Francis, asked his son about repeatedly.

Many years later ‘The Cat’ is the main character in a graphic novel (with comic book characterisation and images, but much bigger than the average comic book) of the same name at the University of the West Indies (UWI), Mona campus, on Friday evening.

Andrew specially thanked Alfred, who was in the audience along with other family members, as “a comic book fan”. With his father’s prodding, Alfred said “Over time, I have become confident that this is a very good character”.

At close to 100 pages, The Cat follows the lives of three Jamaican boyhood friends, Jonathan, Kenneth, and Phillip. It is the first, Jonathan, who most takes to martial arts training and becomes The Cat.

Francis read scenes from the graphic novel, the images projected on big screen along with the text (all in Jamaican language or Patois), changing tone and inflection as required, to the delight of those in attendance. The reading ended with The Cat about to tackle his biggest challenge, The Face, who has a “steroid-enhanced physique”.

There was mention of change of another kind, in matters of identity. Guest speaker, Chief Justice Zaila McCalla, said “I can’t remember when I read my first comic book, but I remember how liberated I felt”. Naming popular comic-book characters Archie, Superman and Spiderman, McCalla said The Cat is “much more exciting” than the adventures of the foreign characters.

“So out go Archie and his friends,” McCalla said, to laughter. She added: “I hope in time it will be serialised and we can read about The Cat, instead of Rex Morgan, MD.”

“I commend you for your foresight in not only recognising the necessity for a work of this nature, but putting in the hard work necessary to make it a reality,” McCalla said directly to Francis.

“I am actually embarrassed, I was doing only white superheroes at one point. When I was seven years old, I started drawing black superheroes,” he said.

He hopes to get The Cat to the level where he can be in a movie, “maybe co-starring with Batman”. And in terms of the language, Francis expressed his confidence that “one day our Jamaican language will be accepted as a language, not just as entertainment”.

And he sees ‘The Cat’ as part of that progression.

There was music at the launch, as Bagga Case sang at the start and end, including a moving spiritual number.

For the original report go to http://jamaica-gleaner.com/gleaner/20131029/ent/ent3.html