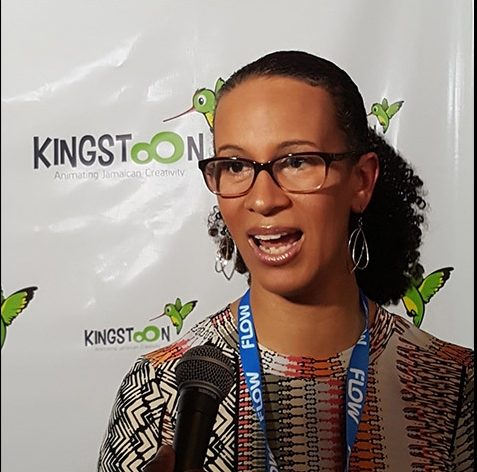 Sesame Workshop Film Producer, Kimberly Wright, speaks with JIS News at the third staging of the KingstOOn animation festival held April 5 to 7 at the University of Technology (UTech), St. Andrew.

Local animators and film producers are being encouraged to showcase their work on social media platforms to increase their chances of being seen by industry players.

The advice comes from Sesame Workshop Film Producer, Kimberly Wright, who spoke to JIS News at the third staging of the KingstOOn animation festival.

“I think now more than ever, it’s easier for you to get their work seen via all the online platforms… . The more people that see it, there will be someone able to help you; you just never know. But until you get it out there you can’t just draw and doodle at home. Get it out there and get it seen,” she said.

The festival was hosted by the Youth Employment in the Digital and Animation Industries (YEDAI) in collaboration with the World Bank.

Ms. Wright, who commissions live action and animated short films for the 50-year-old, children’s show, Sesame Street, attends festivals like KingstOOn and listens to pitches from film producers and animators who wish to have their work be a part of the show.

“I’ve seen some great work already; I’ve seen some great pitches… . If there is a way to move forward with some of them, that’s going to be what I am going to push to do, but I have to go back to the larger team and see what they think and if they agree with me,” she said.

Sesame Street has seven segments, four of which comprise commissioned animation and short films. The show is currently airing season 49, with production for season 50 already complete.

The 49th season includes 78 commissioned films from 44 film-makers from around the world, including the Caribbean, among them a Jamaican art student in the United States of America.

Requests for pitches are sent out multiple times per season to film-makers and animators. For more information on the pitch and commissioning process, contact Kimberly Wright at kimberly.wright@sesame.org.