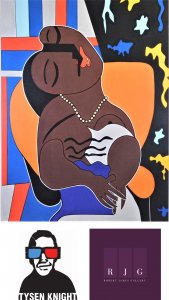 Knight, who grew up during the peak of the street art movement, says he was inspired by the works of Jean-Michel Basquiat, Keith Haring and Andy Warhol.  He uses those influences along with the styles of great classic artists to create unique pop culture graffiti pieces that hang in private and public collections around the world.  “I like to blur the lines between street art and fine art to create something new that I hope captivates and inspires people from all walks of life,” says Knight.

According to the co-curators of RobertJamesGallery.com, Robert Byhre and James Hollenbeck, “We’ve been fans of Tysen for several years and we asked him to create the Masterpiece Mash-Up collection exclusively for our online gallery. The pieces listed on the site are the first in an ever-expanding series of original works on paper and canvas that we feel will best represent Tysen’s vibrant colorful whimsical style.”

In addition to his art, Knight has worked in many different forms of media including acting in feature films and music videos, modeling, and even directing his own full-length film, “The Art of the Hustle: Street Art Documentary,” which is getting critical acclaim at film festivals internationally.

To see this new collection by Tysen Knight, visit www.RobertJamesGallery.com  To learn more about Tysen Knight and his career visit www.TysenKnight.com