RDX on a new mission 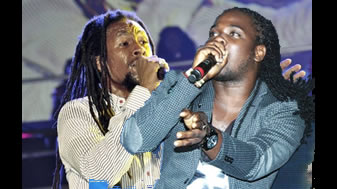 Entertainers like Louie Rankin, aka Teddy Bruckshut, I-Octane, Jah Cure, Gyptian, Popcaan, Tommy Lee Sparta and Ginjah are some of the entertainers who have endorsed the charity in the form of video clips, which offer their support to mothers who have faced the struggles of raising children without fathers.

The founder and executive director of SMIP is Sherril Downer. She is a mother of four and says she started the charity in 2009 in an effort to help ease the pain and hardship faced by single mothers.

“I started with just a few families in Jamaica but it grew into something much bigger than that. I could not sleep comfortable after hearing the plights of the many struggling mothers who reached out to me for help. So with much prayer and help from many generous organisations, SMIP grew into a movement that helps more than 250 families in Jamaica and Canada,” stated Downer, who resides in Canada.

Downer says she is overwhelmed but grateful for all the support SMIP has received from the entertainment fraternity.

“I am grateful for all the supportive and promotional videos donated by all the artistes and actors who offered their time and effort for the cause. It just goes to show that there are good people in entertainment. The videos will definitely help to garner support for the charity, so we are truly thankful,” Downer stated.

“It’s hard being a single parent, especially in this challenging financial time but it is important that we break the cycle of poverty and this can only be done if we give our children a fair chance of success,” Downer concluded.

Internationally acclaimed Jamaican actor Teddy Bruckshut, who has been supporting the movement, says, “From what I see growing up, a lot of mothers have to go through struggle. What I think the government needs to do instead of buying guns for the police, is set up welfare for single mothers because it’s some of these same children that turn to violence because they want to eat,” he said.

The local branch for the organisation is located in Ewarton, St Catherine. Persons who wish to donate to SMIP can visit the organisation’s website at www.smipjamaica.org.

Teddy Bruckshut is known for his role in the international movie Shottas and will be featured in a soon-to-be-released movie called Scotch Bonnet which also features dancehall artiste/actor Ninja Man.

For the original report go to http://jamaica-star.com/thestar/20131010/ent/ent1.html