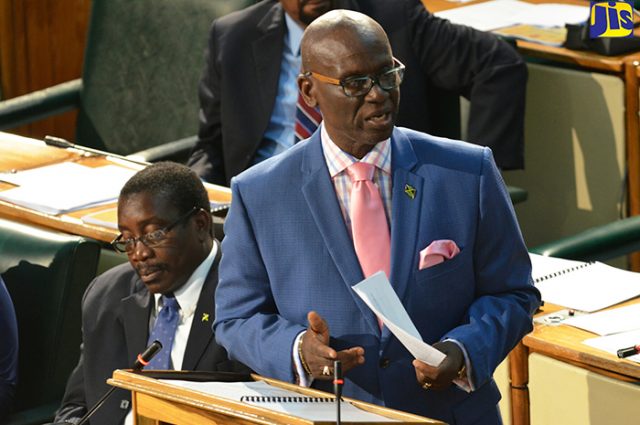 Minister of Local Government and Community Development, Hon. Desmond McKenzie, says the various Ministries, Departments and Agencies of Government are now assessing the full impact of the rains that swept the island last week.

In a statement to the House of Representatives on April 25, Mr. McKenzie said the social impact is of great concern, and the Ministry of Labour and Social Security, along with the Poor Relief Departments of the Local Authorities; voluntary agencies, such as the Salvation Army and the Red Cross are gathering the necessary information.

“The intention is to use this information to implement a comprehensive Assistance Programme to restore dignity to our affected citizens. The details of the programme will be shared with the House in due course,” he said.

He noted that the Ministry will also be providing financial assistance to affected Municipal Corporations.

“Additionally, the rubble created by the flooding and landslides will be removed. Just as importantly, the Ministry of Health is being engaged as we try to guard against any potential mosquito nuisance or waterborne diseases as the floodwaters subside,” Mr. McKenzie said.

The Minister said the Office of Disaster Preparedness and Emergency Management and the Local Authorities responded quickly to the needs of residents, and ensured that relief materials, including mattresses, blankets, sheets, cases of drinking water and tarpaulins, were supplied.

Some 23 persons received emergency care in Clarendon, while the remaining 26 were cared for in St. Thomas. All shelters were deactivated the next day, Sunday, April 23.

Meanwhile, the National Works Agency is conducting an assessment of damage to the main road network, while the parochial roads and minor water-supply network are being assessed by the Ministry’s Technical Services Division, supported by the Municipal Corporations.

Mr. McKenzie said the preliminary report of the National Works Agency showed that there is damage to the main road network across 10 parishes, with Clarendon, St. Thomas, St. Catherine, St. Elizabeth and Portland being particularly affected. The estimate to repair the damage is $352 million.

“The assessment of the municipal infrastructure by the Ministry’s technical team and the Local Authorities has, so far, revealed a damage assessment total of $139.8 million across three parishes: Clarendon ($86.3 million); St. Elizabeth ($23.5 million) and St. Thomas ($30 million),” he said.

He further informed that the total damage estimate to this point is $491.8 million.

Mr. McKenzie advised that the Ministry will be reviewing the existing structures, particularly in town centres and other urban areas of the country, to see where run-off capacity can be significantly expanded in the short to medium term.

“While there are other factors that can be cited as causes of flooding, there is simply no denying that insufficient drainage capacity is a fundamental reason, and the time has come to address the problems associated with rain events in a fundamental way,” he said.

Mr. McKenzie said the Local Government Ministry will be collaborating with the Ministry of Economic Growth and Job Creation to develop a programme to expand the country’s infrastructure, so as to put an end to flooding once any type of rain occurs.