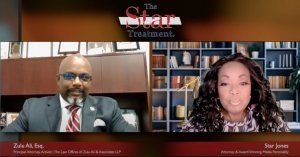 Attorney Ali, a practicing trial lawyer, activist, former police officer, and U.S. marine veteran, recounted his inspiration to become an attorney. “My grandfather, A.D. Reynolds, worked as a janitor, cleaned law offices at night. As a little boy I would go along with him and one night while cleaning the office of an attorney named Tyrus Cobb, he took me into the library and introduced me to Attorney Cobb by stating this is my grandson, he is going to be the next Avon Williams [Avon Williams was a great civil rights lawyer in Nashville, Tennessee]……..Attorney Cobb began telling me about Williams and other great civil rights lawyers and how they changed the world. I left there that day thinking that is what I wanted to do.  20 years later I was a police officer and was in probate court.  The Judge was the attorney my grandfather introduced me to 20 years earlier.  When he called the case he stated in front of everyone in open court “everyone this is the next Avon Williams” he then went on to tell me how great a man my grandfather was.  I became very emotional [and pursued my original passion to become an attorney].”

Ali attributes most of his success to his mother, who raised him as a single parent working two jobs as a factory worker and waitress, who instilled in him a great degree of discipline, resiliency, and work ethic; and his wife (Charito) of over 35 years, who has always been a solid foundation and supporter.

A former police officer and U.S. marine corps veteran, Attorney Ali earned a juris doctorate in law from Trinity International University Law School, a master’s in business (M.B.A.) and administration of justice (M.S.) from University of Phoenix, and a liberal arts degree with an emphasis in African Studies from Regents College through a consortium with Tennessee State University.  He is currently a doctoral scholar (human rights NGO management) at California Southern University.

In 2007, Attorney Zulu Ali opened The Law Offices of Zulu Ali and Associates, LLP based in Riverside, California (zulualilaw.com) and is the largest Black-owned law firm in California’s Inland Empire. The firm focuses on representing persons accused of crimes, immigrants, victims of discrimination, and persons seeking civil justice in state and federal courts throughout the United States.  He is also registered counsel at the African Court of Human Rights in Tanzania (East Africa) and International Criminal Court at The Hague (Netherlands).

Attorney Ali currently serves as Director of the Stop and Frisk Youth Leadership Academy, which trains at risk youth and others to deal with police encounters and life skills (https://stopfriskacademy.com); Director of the Southern California Veterans Legal Clinic, a legal clinic offering no cost and low cost legal services to military veterans (https://zulualilaw.com/?page_id=1539).  Ali is a member of Iota Phi Theta Fraternity, Inc. and has been appointed to serve on its national governing body as General Legal Counsel.

In 2017, Attorney Ali was recognized as one of the most influential African American Leaders in Los Angeles by the National Action Network founded by Reverend Al Sharpton; and, in 2021, he received the Albert Nelson Lifetime Achievement Award for his work in law and activism.  Attorney Ali has been recognized as a top trial lawyer by numerous trial lawyer associations and publications.

He resides in Southern California with his wife (Charito) of more than 35 years; with their four adult children, Christine, Whitney, Ashley, and Lynda; and four grandchildren, Amayah, Tye, Izem, and Amina.