National Voice of Monday Night Football offers Christmas wish for his fans: ‘You can achieve absolutely anything you want in this life – just like I have.’

WASHINGTON, Dec. 14, 2020 /PRNewswire/ — Author and wildly popular voiceover artist, Cayman Kelly (http://caymankelly.com/) announced his autobiography had secured Number One Bestselling New Release status on Amazon.com in just a few short months after its release. “From $6 an Hour to a Million Dollar Dream” is a detailed memoir of Kelly’s journey from a hopeful minimum wage worker to a professional radio personality, after becoming the first African-American to be named the official voice of ESPN Radio Networks or any sports radio network in the country. But more than just a fascinating account of his life so far, Kelly’s story reflects his deep desire to help uplift others who also want to achieve their life goals. Offering a wealth of tips about finding success through planning, perseverance, positive relationships, and thinking creatively and innovatively – Kelly’s journey is filled with profound lessons for any reader.

By the age of 15, Kelly had already developed the singular, stand-out voice that immediately gained the attention of any audience who heard him. His voice eventually landed Kelly in radio, reading promos and commercials while still just a sophomore in high school. Afterwards, he attended college, later graduating as a Mass Communications major. But that is where the real struggle to succeed began. 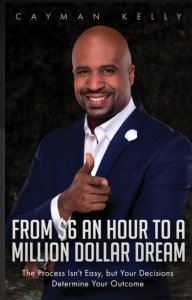 Breaking into show business is hard enough for anyone, but especially difficult for an African American man who grew up as a member of the working class. Kelly had to rely on talent, skill, wise choices, and a deep faith in what he was trying to accomplish. The book describes that process – from his early struggles to getting his big break with the BET and eventually becoming a celebrated, household name for Sirius XM Heart & Soul, where he hosts a national radio show Monday – Saturday at Noon – 6 EST – with all of the wonderful famous people and friends he made along the way.

“I’m really excited that people are resonating with my story,” said Cayman Kelly. “It was written from my heart. And this kind of story is especially important around the holidays – a season of hope. Because I want people to understand that they can achieve whatever they put their minds to. It’s not just a slogan or a catchy feel-good expression. You really can live your best life. It takes effort, dedication, and working through a lot of obstacles – that’s true. But the most important thing to remember is that the biggest obstacle of all is the one you carry around in your head. Not believing in yourself, and what you’re trying to achieve. You have to be your own biggest supporter, first. The rest will follow.”

About Cayman Kelly: The National Voice of ESPN and Monday Night Football

Cayman Kelly is a multimedia professional, host, actor, author, radio personality and leading voice-over artist known for his smooth and contemporary prime-time sound. Kelly began his promising career as a voice-over artist for BET, and has since created a wide variety of materials for television promos, including TV Land, TV One, Cartoon Network, Bounce TV and others. His catalog of hosted events and voice-overs is long and distinguished, including multiple major music festivals, like Essence, Capital Jazz, St. Kitts, Bermuda, and U Street; a voice performance for “Grand Theft Auto V”; album-release parties for India Aria, Jennifer Hudson, Bobby Brown, Patti Labelle and Alicia Keys; and interviews with Jamie Foxx, Mo’Nique, Janet Jackson, and Mary J. Blige.

Kelly is also the imaging voice for multiple radio stations, including POWER 105.1 in New York, he’s also the voice of the Nationally syndicated Morning Show, “The Breakfast Club,” and host of popular national show on SiriusXM’s Heart & Soul. Recently, Kelly was chosen as the new voice for ESPN and NFL Monday Night Football – the first African American to achieve the position. Learn more about his life and work at: www.CaymanKelly.com.