Because of Them We Can® Founder, Eunique Jones Gibson Kicks Off Black History Month With Launch of New Card Game, CultureTags™

A game for people who love hashtags and the culture 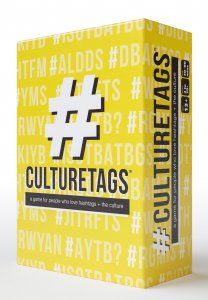 HYATTSVILLE, Md., Jan. 31, 2020 /PRNewswire/ — Today Eunique Jones Gibson, the founder of Because of Them We Can® (BOTWC), announced the launch of CultureTags™, a spirited game that tests just how well you know the culture. The game is simple. Grab a card, show your team the acronym and share hints to help them guess the phrase without giving it away.

Intended for 2 to 20 additional players, the objective of CultureTags™ is to get through as many cards as you can. Categories include Black Twitter, Church, Daily Sayings, Family and Friends, Film and TV, Songs and Lyrics, and Words to Live By.

“I grew up during the rise of social media and subsequently built my career in this space. Creating Because of Them We Can has been one of the most meaningful endeavors of my life thus far,” says Eunique Jones Gibson. “However, it has also made me want to create more ways for us to do the same offline, through human interaction. I created CultureTags™ because I wanted to create a game that reflected the culture and the way we talk on social media and through text messages. My goal has always been to develop and create products that ignite conversations, introspection & social change, and CultureTags™ is an extension of the work that continues to motivate me.”

In 2013, Eunique Jones Gibson launched the “Because of Them We Can” campaign during Black History month to counter the images and stories in the media that painted Black people in a negative light. By featuring photos of kids dressed as African American figures like Janelle Monae, Langston Hughes, Rosa Parks and more, the campaign aimed to change the narrative and boost the self-esteem of children. Since then, BOTWC has evolved into a media platform.

To learn more about CultureTags™ and to receive updates, please visit: www.culturetags.com, follow the brand on Instagram (@culturetags) and pre-order the game at https://bit.ly/2UdqAt5.

About CultureTags™CultureTags™ is a game created for people who love hashtags and culture.

About Because Of Them, We Can®Because of Them, We Can® is a platform that creates and curates content that highlights and amplifies Black history and excellence. Founded by the award-winning content creator, Eunique Jones Gibson in February 2013, BOTWC continues to explore and implement creative ways to refute stereotypes and connect the dots between the past, present and future.