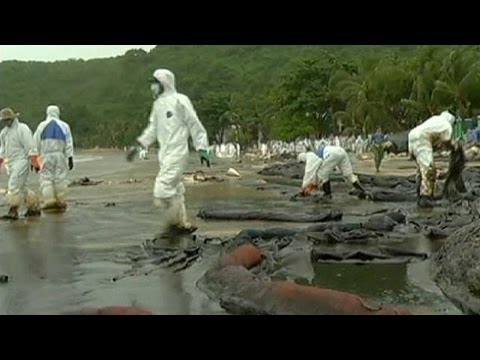 BELIZE CITY, Belize _ Belize is considering new offshore drilling regulations that could open up nearly the entire coast to exploration and exploitation, environmental groups have warned, calling it a threat to vital reefs, fisheries and tourism concerns.

The proposal recently made public by the Ministry of Energy would even allow drilling in the vicinity of the Great Blue Hole, a world-famous diving destination that can be seen from space and looks just like what its name suggests, the U.S.-based activist group Oceana said.

“They’ve declared open-season on almost 99 per cent of Belize’s marine area,” Janelle Chanona, Oceana’s vice-president for the Central American nation, said by phone from the capital, Belmopan. “That includes seven World Heritage sites, that includes marine protected areas … and it is unacceptable.”

The proposal is still in the draft stage. Government officials did not respond to requests for comment Thursday, but have said previously that they are considering possible modifications including feedback from groups like Oceana. Belize currently has a moratorium on offshore drilling.

Environmental experts say even a small oil spill could jeopardize the powdery-white-sand cays and turquoise waters that make tourism the Central American country’s leading source of foreign income, responsible for up to 25 per cent of its GDP.

Activists say oil development also poses environmental concerns for Belize’s reefs, which in addition to being popular diving and snorkeling reserves are home to myriad marine species and help shelter the country from hurricanes and rising seas.

Chanona estimated the annual value of reef protection at $750 million.

Past oil exploration efforts have not resulted in productive wells, and there is no proof that viable reserves lie beneath the Caribbean sea floor off Belize. The big drop in oil prices over the last year has also dampened enthusiasm for exploration of unproven or unconventional fields around Latin America.

But even development that falls short of extracting crude has an impact, experts say. Drilling exploratory wells can introduce mud into ecosystems, for example, and seismic testing can interfere with dolphins’ ability to use sonar to identify food and predators, Chanona said.

Lawrence Epstein, who directs Belize operations for the Environmental Defence Fund, said 15,000 people, or about 5 per cent of Belize’s population, depend on fisheries for their livelihoods, and those, too, could be at risk.

“By any measure, both the exploration and any sort of accident that might happen could damage the fishing industry as well as the tourism industry,” Epstein said.

Chanona said Oceana sent the government a report documenting its concerns and that officials promised to take it into account during a review in the coming months before a final policy is formalized, something that could happen by the end of the year.

But activists are sounding the alarm now, saying Belize has a spotty record on preservation. As one recent example, they point to a road-builder’s unauthorized 2013 bulldozing of one of Belize’s biggest Mayan pyramids to scavenge rock.

“The (oil) proposal doesn’t have any legal backing in place right now, but that it has been presented as a draft … becomes a very poor starting point for meaningful, honest conversation,” Chanona said. “How do you even begin to talk about having the Great Blue Hole up for consideration as part of your zonation plan?”