NURSE IN GERMANY ACCUSED OF POISONING BABIES WITH MORPHINE

The Art of Expression: N.C. Middle-schoolers’ Photography on Display at ‘The Met’

George Khouri, Creator of Black Coffee, at Funny Or Die 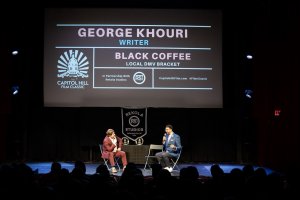 Black Coffee is a comedy about four friends with wildly different motives who open a black-owned coffee shop in the heart of the nation’s capital. The series features a super talented cast and crew with a combined following of over 20 million social media users.

George Khouri, an award-winning writer and producer, first created the pilot to show Washington, DC behind the Capitol. “Most series on television show DC through a political lens. I wanted to share the rich and diverse culture of the city with international audiences. This is the DC that hasn’t be shown on television until now,” George proudly states.

“I’m extremely excited to have Black Coffee on Funny or Die…I can’t wait to see what other hilarious scenarios we come up with in the writer’s room for the upcoming seasons,” shares George. Considering the millions of streams on the episodes from Season 1, viewers must be equally as excited.