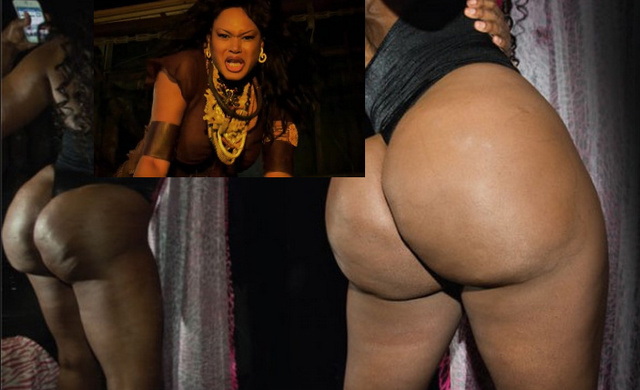 PHILADELPHIA _ A Gothic hip-hop artist charged with killing a London break dancer with an illegal buttocks injection name-dropped her way through testimony Friday, saying one of the celebrities who sought her out became “a walking billboard” for her work.

Padge-Victoria Windslowe claimed model Amber Rose started receiving injections from her before she became famous and continued until two days before the 2011 death of dancer Claudia Aderotimi.

She said under cross-examination that Kanye West dropped Rose off for one procedure when the two were dating and that she was supposed to perform a “correction” on Nicki Minaj that never happened.

Representatives for Rose and Minaj did not immediately respond to emails requesting comment.

Windslowe, 45, who returns to the stand Monday, talked of the dizzying array of names, addresses, careers and identities she has assumed in the 20 years she acknowledges doing underground cosmetic surgery on the side.

“Amber was like a walking billboard,” she said of Rose, who was raised in Philadelphia. “She brought a lot of girls from VH1.”

Asked by Assistant District Attorney Carlos Vega why they would choose an unlicensed practitioner over a Los Angeles plastic surgeon, Windslowe said, “I was the best, and I don’t mean that to be cocky.”

“It’s set up like a friendly date, but I’m not naive about what goes on,” she said. “They’re doing something. It’s not just escorting.”

She said she kept half their take and made good money. But she stopped after her father died in 2003 because she “didn’t feel good about it anymore.”

The names she used on bank cards and mail deliveries before and after Aderotimi’s death included birth name Forrest Gordon, the more feminine Foreest Leona Gordon and Foreest Leona Giordani.

“I thought it sounded like a movie star name, so I liked it,” she said of the last name.

She acknowledged that police found a fake passport, Social Security card and New York driver’s license during searches of some of the five Philadelphia-area properties linked to her in the years before her 2012 arrest.

Windslowe is charged with third-degree murder in the death of the 20-year-old Aderotimi, who was injected with low-grade silicone at a Philadelphia airport hotel.

Doctors have told jurors during the two-week trial that the syringe hit a vein and sent silicone to the woman’s lungs. Two other women testified they spent months in the hospital with similar injuries after visits with Windslowe, including one who received an injection on a dining room table at a “pumping party.”

Defence lawyer David Rudenstein seemingly hoped to show jurors through Windslowe’s testimony that she prepped them with alcohol before and after the injections and took other safety measures.

However, prosecutors say, she mostly used nonsterile, industrial silicone, not the medical-grade silicone that is encased in implants during standard cosmetic surgeries.

“I told (clients) I’ve been doing this for years, I’ve done it to myself and my friends, and I was trained by a nurse up in Washington Heights (in New York City) back in 1995,” Windslowe said Friday, explaining her credentials.

On the stand Thursday, Windslowe said she was trained by a doctor in Thailand and another in South America who performed her sex-change operation.

She said she started doing body sculpting two decades ago to help transgender friends. Transgender women often want to plump up an indent in the side of the buttocks they call “the boy pocket,” she said.

Windslowe charged about $1,000 to $2,000 depending on the amount of silicone requested. Some clients, including a pole dancer she discussed Friday, saw her a half-dozen times.

Windslowe told jurors Thursday that she has worked on thousands of people, earning the title “the Michelangelo of buttocks injections” from her clients. She says she uses the same products on herself.