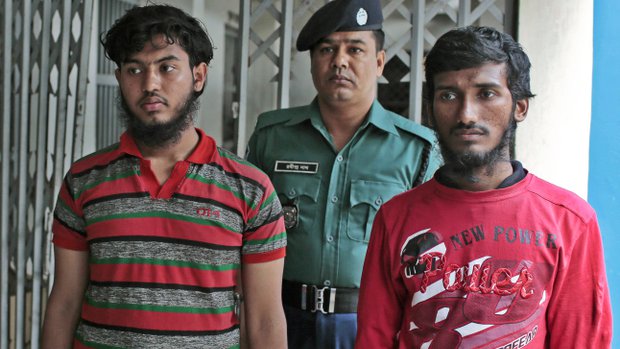 DHAKA, Bangladesh _ A blogger was hacked to death by three men in Bangladesh’s capital on Monday, and two of the attackers were caught near the scene, police said.

The killing took place a month after a prominent
Bangladeshi-American blogger known for speaking out against
religious extremism was hacked to death in Dhaka.

Two suspects, both students at Islamic schools, were captured and three meat cleavers were recovered, Sarker said. The third suspect fled, he said.

One of the suspects told reporters they attacked Babu because he had disrespected Islam’s Prophet Muhammad.

“I stabbed him because he humiliated my prophet,” said Jikrullah, a 20-year-old student at Hathajari Madrassah in the southeastern district of Chittagong, without elaborating.

Jikrullah said he travelled from Chittagong and stayed overnight at a mosque to attack Babu.

The other detained suspect, Ariful Islam, also 20, is a student at an Islamic school in Dhaka’s Mirpur area. They named a third suspect, but details about him were not available.

It was not immediately known what kind of blogging Babu did, but the suspects told police they targeted him for anti-Islamic writings, Sarker said.

Two of Babu’s cousins told reporters at Dhaka Medical College Hospital, where his body was being kept, that he recently joined a travel agency in Dhaka after finishing his studies, and they were not aware of any blogging he had done.

Local media reported that Babu had a Facebook page that contained the line “Iamavijit,” meaning he was a follower of Avijit Roy, the Bangladeshi-American blogger who was hacked to death late last month.

Roy, a Bangladesh-born U.S. citizen, died after being attacked at Dhaka University as he was leaving a book fair with his wife. A previously unknown militant group, Ansar Bangla 7, claimed responsibility for the attack. Detectives have arrested one suspect in the case, and the FBI is helping with the investigation.