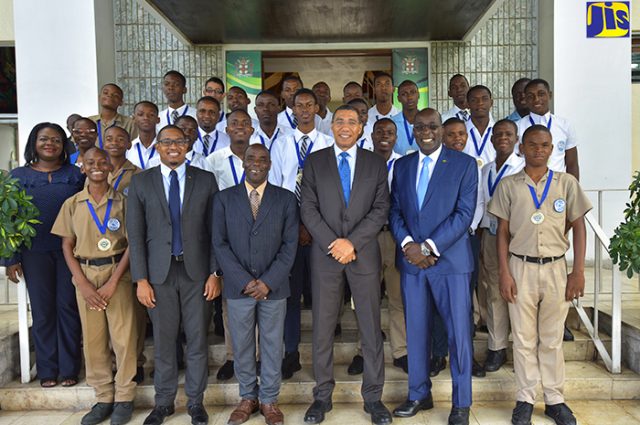 Boys at the Bog Walk High School in St. Catherine are being impacted positively by the ‘Boys Big-Up Programme’, which awards them for displaying good deportment at all times.

Conceptualiser of the initiative, Head of the Language Department at the school, Elaine Reid, tells JIS News that Bog Walk High currently has more boys than girls.

“We found that we had a number of boys with challenges, whether it’s reading, or everyday issues that boys face, some of them more than the others. I was thinking what we could do to help these boys, those who are conforming and those who are not,” she says.

“The idea came from what I saw. The Mayor in Florida, she was awarding 1,000 young men who are having challenges, and it just came to me that maybe we could do that at Bog Walk. So, I came up with the 100 boys being awarded for good behaviour, conduct and that sort of thing,” Ms. Reid adds.

The programme was started in February, when some 100 boys were presented with medals for good behaviour. They were then treated to brunch at a restaurant in the community. The students were recommended by their teachers.

“Since then, some of the boys have been saying, Miss, I have been keeping my pants on my waist, [so] when am I going to be awarded? So, it has served its purpose; the boys are doing very well,” Ms. Reid says.

Ms. Reid notes that the institution is seeking to improve on the programme for the 2018/19 school year.

“We want to, maybe, award scholarships, not necessarily to all the boys, but certainly a top boy. It’s like a brotherhood we have started, as these boys begin to work with other boys. In addition, we are looking at having ‘Focus Tuesdays’, where we look at issues that boys have and have them talking during the first half hour of lunch time. Also incentives… . We want to start with a dinner for a boy and his parents to just keep the momentum going,” she says.

Principal of Bog Walk High School, Patrick Phillips, says the initiative seeks to create a culture of excellence at the institution, especially among boys.

“When we look at our society, a lot of the misdemeanour is alleged to be perpetuated by our males. And so we want to say to our boys, you are valuable, you can be positive, and you can make something of yourselves,” he tells JIS News.

He adds that sometimes, bad behaviour is “rewarded” in the education system, due to the focus being placed on it.

“So, a boy who is giving problems is called on all the while and is focused on. The ones who are doing well are not noticed, so we are saying that not only are we going to try to have our intervention programme for the ones who are not doing well, Recipient of a medal, Tyrone Blake, says he feels very pleased to have been awarded.

“It is like a motivator, it drives us to continue the hard work,” Tyrone tells JIS News.

For his part, Head Boy at Bog Walk High School, Dewayne White, says that being an awardee of the programme has resulted in a great deal of personal improvement.

“It serves as a motivational factor among the boys at school, and being an awardee allows me to have an impact on them, so they would look up to me as an example,” Dewayne adds.

As part of their reward, the boys were able to meet Prime Minister, the Most Hon. Andrew Holness, during a courtesy call on April 25 at Jamaica House.

At the event, he encouraged the boys to be disciplined, while encouraging them to see themselves as leaders.

“I am very happy to see that Bog Walk is doing its part to ensure that its male population is graduating the education system with a certain level of refinement and a certain level of understanding of the importance of values that make the society work,” he said.

Meanwhile, State Minister in the Ministry of Education, Youth and Information, Hon. Floyd Green, says that, normally, focus is placed on negative behaviour, “not recognising when you award positive behaviour, you influence others to do well”.

“I think you are on to something very good at Bog Walk High, and it ties in with some of the messages that we have been sending across the education system,” Mr. Green notes.