Boi-1da hits the stage with 2 Chainz, Killy & Savannah Ré for an exclusive and distinctive night of hip-hop, hosted by LOTTO MAX

Winners of the LOTTO MAX Up Close Concert Series contest are treated to an iconic night of hip-hop curated by Boi-1da, one of raps hottest beatmakers, at the Mod Club in Toronto on Wednesday. (Photo Credit: Riley Taylor) (CNW Group/OLG Winners)

TORONTO, Oct. 25, 2018 /CNW/ – Last night hip-hop fans were treated to an iconic night of music curated by one of rap’s hottest beatmakers. Award-winning Toronto producer Boi-1da brought his global show to the Mod Club in Toronto, one of the city’s most intimate music venues. Joined on stage by three amazing acts – heavyweight hitmaker and hip-hop superstar 2 Chainz, Scarborough’s own skyrocketing star Killy and Toronto songstress Savannah Ré – Boi-1da delivered a show like no other. And everyone in the room was a winner!  There were no tickets for this concert – the only way in was to win with LOTTO MAX.

“I really enjoyed the opportunity to do something special for this city,” shared Boi-1da. “Looking forward to doing more things like this – it’s necessary.” 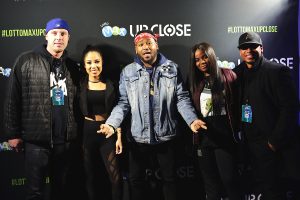 Winners Cody Smith (L) and Renard Patrick (R) pose with Keisha Chanté, Boi-1da and Savannah Ré, during an exclusive meet and greet prior to the start of the concert at the Mod Club in Toronto on Wednesday. The only way in was to win with the LOTTO MAX Up Close Concert Series Contest. (Photo Credit: Riley Taylor) (CNW Group/OLG Winners)

Prior to the start of the show, 20 contest winners had the opportunity to get up close with the artists at a meet and greet session. “I grew up in Scarborough loving music, and I feel a connection to those artists who lived in the same sort of neighbourhoods as me and experienced a similar upbringing. Getting the chance to meet them and see them perform in Toronto, after finding global success, was inspiring,” shared contest winner Cody Smith of Scarborough. 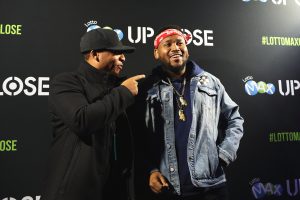 “This experience has been exhilarating from start to end,” continued attendee Renard Patrick of Ajax. “The highlight for me has been seeing artists from the whole spectrum – from the older generation to the new generation – brought together by Boi-1da, a bridge between two, come together to celebrate the art of hip-hop.”

“Knowing that music is an important passion point for our lottery players, and that music lives right in that world of dreaming bigger (who hasn’t daydreamed about getting Up Close to their music heroes?), we introduced the LOTTO MAX Up Close platform,” shared Greg Dermer, OLG’s Brand Manager for LOTTO MAX. “We’re bringing the essence of dreaming bigger to life by making dream concerts a reality – elevating music experiences and getting the fans closer to the artists they love.”

LOTTO MAX offered Ontario residents, 18 years of age and older, an exclusive chance to make their dream a reality by entering the LOTTO MAX ‘Up Close Concert Series’ contest.

About LOTTO MAX Up Close

LOTTO MAX is the big jackpot lottery game that wants you to dream bigger.  Draws occur every Friday and have jackpots that range from $10M to $60M. The LOTTO MAX Up Close platform was launched in 2017 to allow music fans to bring their concert dreams to life. The purpose of LOTTO MAX Up Close is to deliver elevated entertainment experiences to fans (we want to get them closer to their entertainment dreams than anyone else – whether it’s music, sports or film)!

OLG is a crown agency that develops world-class gaming entertainment for the Province of Ontario.  Acting in a socially responsible way, OLG conducts and manages land-based gaming facilities; the sale of province-wide lottery games; PlayOLG Internet gaming; and the delivery of bingo and other electronic gaming products at Charitable Gaming Centres. OLG is also helping to build a more sustainable horse racing industry in Ontario. Since 1975, OLG has provided nearly $47 billion to the people and Province of Ontario to support key government priorities like health care; the treatment, prevention and research of problem gambling; and support for amateur athletes. Each year, proceeds from OLG’s operations also support host communities, Ontario First Nations, lottery retailers and local charities across the province

All for Here – 100 per cent of OLG’s proceeds are invested in Ontario
OLG.ca
Follow on Twitter @OLGtoday