Farmers Urged to Maximise the Use of Technology 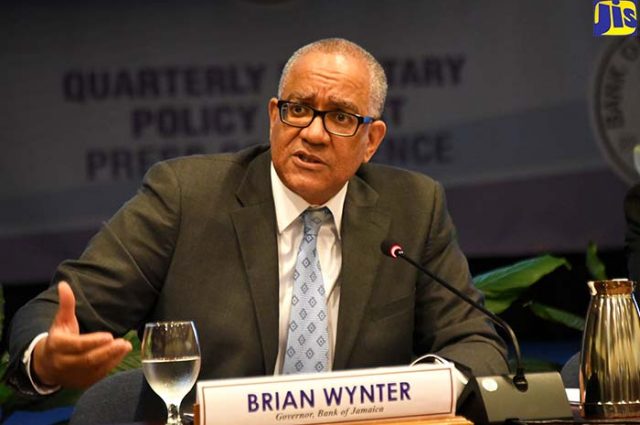 Bank of Jamaica (BOJ) Governor, Brian Wynter, says the 3.2 per cent rate of inflation recorded for April 2018, fell below the BOJ’s target range of four to six per cent.

Additionally, he said it was lower than the 3.9 per cent out-turn for March 2018, and the 5.2 per cent recorded for December 2017, as reported by the Statistical Institute of Jamaica (STATIN).

The Governor was speaking at the Bank’s quarterly media briefing, at the BOJ auditorium, downtown Kingston, on Monday (May 21).

Mr. Wynter said the reduced rate of inflation was due mainly to the sharper-than-anticipated decline in agricultural prices since January 2018, reflecting a recovery in the sector’s output.

The Governor said the lower rate also resulted from “an unusually sharp decline” in electricity costs in April.

Mr. Wynter said based on these developments, the BOJ’s projection for inflation over the next fiscal year is slightly lower than the figure indicated in February.

The projection then was for inflation to continue tracking around the lower half of the four to six per cent range.

“The projected path now incorporates the impact of the decline in agricultural food prices that has occurred… and also the impact of the upturn of crude oil prices since July last year,” Mr. Wynter said, adding that the recent upturn in grain prices is also included.

Meanwhile, the Governor said the risks to the inflation forecast are “skewed to the downside”.

Mr. Wynter noted that the latter risk is associated with emerging geo-political tensions and protectionist policies that have surfaced over the last six months.

Additionally, he said there is upside risk from higher-than-projected crude oil prices.

“But our current assessment is that crude oil prices will likely fall as geopolitical uncertainties wane and the impact of excess supplies prevails on the market,” Mr. Wynter said.