‘Life Of A King’ Just Weeks Away 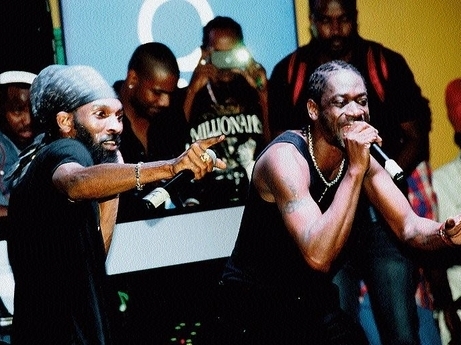 Cross, angry and in his usual militant mood, the Grung Gad, Bounty Killer, stepped on to the Puls8 stage to a fevered response.

Proving he has one of the most extensive catalogues in the history of dancehall, Bounty Killer was not short on delivering hits.

“Big up all people who know bout the ’90s. Big up Buju and big upBeenie Man too. That decade was a decade to remember,” the WarLord declared before launching into Down Inna The Ghetto and Fed Up.

Bounty’s set was punctuated with bits of social commentary which aided his performance.

With all the furore surrounding Queen Ifrica’s Grand Gala performance and her subsequent dismissal from Rastafesta in Canada, Bounty Killer made his stance known.

Love for the ladies

The ladies were not to be left out, as Bounty Killer reaffirmed his love and affection for them through songs such as Fat, Cellular Phone, It’s Ok, Say You’re Leaving, Wine Fi Di General and Get Gal Everyday.

But while no one can deny Bounty Killer’s genius in delivering popular music, it was his interaction with the fans before each song that stole the show.

“My madda never wear false nails, false eyelash, or false hair yet and she was a beautiful Caribbean woman. How some gyal seh dem want a real man and nutten pon dem nuh real,” Killer said to a screaming crowd.

He closed out his high-energy set with songs such as Talk To Dem andNuh Creme To Mi Face.

The much-anticipated return of Spragga Benz to a Jamaican stage did not disappoint.

Hits such as We Nuh Like, Dolly House, Matey A Talk, Shotta Culture and Hotter Dan Dem put the already excited crowd into a frenzy.

Spragga offered a musical treat and was as energetic as ever. The hardcore deejay who stated that he was not an ‘entertainer but a edutainer’, filled his set with presentations from his albums as well as new material.

The overwhelmingly large number of supporters at the venue sang along with Spragga Benz as he continued to deliver a high-level performance with Run Things, Tiny Tot and Done See It.

After concluding his set, Spragga Benz was called back on by the audience.

He willingly obliged by fuelling their excitement with songs such as Jack It Up and Rasta Run The World.

For the original report go to http://jamaica-gleaner.com/gleaner/20130902/ent/ent4.html