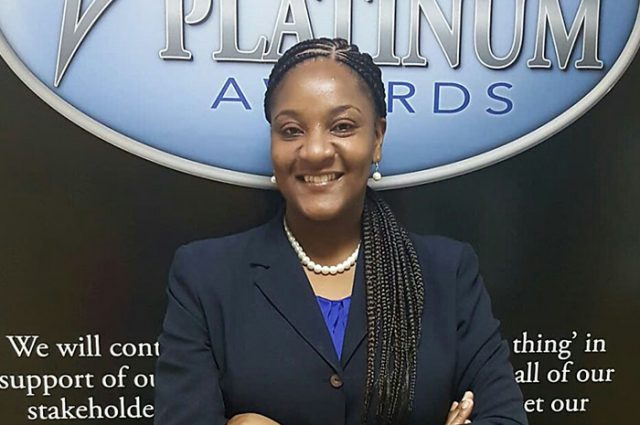 When Curtley-Ann Palmer joined the staff of Sutherland Global Services as a customer service representative in 2014, she had no idea that four years later she would become one of the entity’s top-performing managers.

She tells JIS News that she worked hard and took advantage of all the training programmes, even completing an undergraduate degree at the Mona Campus of the University of the West Indies (UWI).

Her hard work, coupled with her academic qualifications, catapulted her to success, allowing her to climb the rungs to an acting supervisory role and then into her current position as an Acting Account Manager.

In this role, Ms. Palmer oversees the account she has been assigned and ensures all client relations are smooth. She also works with her team to address work-related challenges.

“One of the most rewarding moments for me is the promotion I have received. Just to be recognised; I have managed to get employee of the month a couple times,” she proudly tells JIS News.

Ms. Palmer strongly supports the push by the Government to use the business process outsourcing (BPO) industry as one of the key sources of employment of young Jamaicans as part of national growth strategy.

The Government is positioning BPO as a major sector for investment as it targets employment of 300,000 Jamaicans in the industry over the next five years.

BPO is the fastest-growing industry and has had the highest employment rate of any sector in Jamaica over the past decade.

The sector, for which estimated spend grew from US$230 million in 2012 to some US$430 million in 2015, represents a critical point in the plan for inclusive growth of the local economy and has been prioritised in Jamaica’s strategic development plan, Vision 2030.

Industries such as telecommunications, banking, insurance, healthcare, finance and accounting, gaming and tech support are all being serviced from Jamaica.

In addition to Sutherland Global Services, international companies such as Xerox, itel-BPO and IBEX Global opened up locations in the island last year and together have generated more than US$500 million in revenues.

In August, ground was broken for a new 63,000-square-foot building at the Montego Bay Freezone. The new building, which will increase capacity by 10 per cent, is scheduled for completion by the first half of 2017 and will provide jobs for an additional 2,000 workers.

At least seven similar projects are slated to come on stream shortly.

Montego Bay continues to be the centre of BPO activity, with the majority of the 45 BPO companies in the island located in the Second City and generating 98 per cent of foreign exchange earnings.

Eighty per cent of all operators in Montego Bay are situated in the freezone.

While employment within the freezone grew by 16 per cent in 2015/16, the Government says there is potential to triple the numbers.

Ms. Palmer strongly dispels the myth that the industry only employs persons to work in call centres.

“There is something for everybody within this industry. If you studied finance or human resources; there is a place for you,” Ms. Palmer tells JIS News.

In addition to customer service representatives, call centre agents, information technology technicians and telemarketers, jobs in finance and law have also opened up.

The Jamaica Promotions Corporation (JAMPRO) says there is demand for legal process outsourcing, with law firms utilising outside support services for legal research and other routine work.

Local lawyers and legal officers are being urged to take advantage of these opportunities.

“It’s a growing industry. It does provide employment, so why not capitalise on that. It is a good move, because giant companies are outsourcing their customer services, so it is relevant,” she says.

Employers in the BPO sector are also hailing the push by the Government to use the industry as a key source of job creation.

Founder and Chief Executive Officer of Montego Bay-based itel-BPO Smart Solutions, Yoni Epstein, tells JIS News that the move is a good one, as the sector “can provide many jobs quickly and for relatively low capital expenditure”.

“BPO is an enabler industry,” he tells JIS News. “It is a perfect entry job for school-leavers, and many of them have succeeded and grown to become executives in BPO companies,” he says.

“Many have used it as a catalyst to a job within their field of study and many look at it as a career,” notes Mr. Epstein, who is the Immediate Past President of the Business Process Industry Association (BPIA).

President of the BPIA, Dr. Guna Muppuri, says his association fully supports the Government’s plans and initiatives for the industry, especially those regarding employment.

“This is the industry that can provide hundreds of jobs overnight. This is the best bet for any government to latch on to and invest in, so that we can create employment, which is the real solution to cutting down the crime and giving long-term benefits to the next generation,” he notes.

Dr. Muppuri, who is Chief Executive Officer (CEO) of Bioprist Knowledge Parks, says the “Government is doing everything to open all the doors for investors and also for local persons”.