Breaking News: “Judges Hold Dagger At Holness Throat? Should He Have Surrendered?” 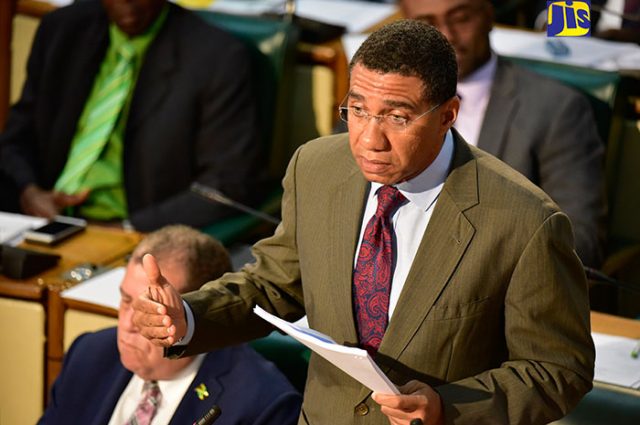 Shameful News. The vexed issue of possibly the Defense Bar previously and then their legal associates .. the judges sending a strange signal to the JLP led Holness administration that they are powerful   … played out yesterday, Monday February 12, Ja, W.I. They shuttered the courts.

We were tempted to headline this piece “Shameful News”  which in fact it is.  The right to protest is not here dismissed … this is still a democracy … it is how it is done. We condemn terrorists when they selfishly hold communities if not states to randsom in order to get their way or point across.

It is our further perspective that the conduct of our so called legal luminaries including our Judges to hold what they cleverly refer to as an “Administrative Meeting” and effectively shutter our courts for a better part of a day is shameful to say the least. This can easily be labeled “Judicial Terrorism”

These are the same judges, a great many of whom fail to deliver timely judgments. They are accused of taking even years to hand down verdicts. What a tangled web? In short they are not without sin themselves. Those spotless, raise your hand, please! We cannot see a hand raised.

When did a dog not only wag its tail? That is all that it is allowed to do … not its body. Are the judges, employees of the state been suddenly elevated to self employed individuals?  So you have a differing view and you withhold your services?  Is this what you swore to uphold? No longer the rights of citizens and the Constitution?  What about those requiring  bail … freedom from custody?

Can we now look up anymore to these sons and daughters of privilege? They have betrayed our trust. Yes, the judges et al. have done just that.

The action of the judges and their associates is tantamount to a dagger drawn at the throat of an unsuspecting victim … the taxpayer, their ultimate employer. The government is their administrator … not their boss. You cannot have more than one boss on a job. Can you?

They are using as their backdrop the acting appointment of Chief Justice Sykes to force PM HOLINESS’ hand to permanently appoint him.

In my perspective, the legislature should stand firm and not bow. This is like surrendering to the terrorist. No way this should be allowed to happen.

For judges of the high and lower courts to stay off and out of their courts in protest is akin to a power grab like a military coup … Zimbawe style.  This could lead to anarchy if not madness … a serious betrayal of trust. Who now wins judges?  This looks like Judicial Blackmail. Can this reaction on the part judges be seen as good order and discipline or be seen as  improper  or otherwise?  We are hard pressed to see it differently. It sets a dangerous precedent, the likes of which we may never recover from.

Stay In Your Lane Judges

The legislature is supposed to call the shots even as there is “SEPARATION OF POWERS”. A strange arrangement but that is what it is.  The administration of justice rests with the legislature although the judges run their courts independently.  We urge the judges et al to say in their lane to avoid an accident.

Separation Of Powers is alice and well in Jamaica. Not in any way under threat.

Do not confuse separation of powers with lawlessness.

“POWER CORRUPTS AND ABSOLUTE POWER CORRUPTS ABSOLUTELY?”  Is this what played out in Kingston and elsewhere in JAMAICA yesterday when apparently daggers were drawn and placed at Holness’ throat by JUDGES et al who withheld their services in protest? Holness should not capitulate. Stay the course and not bow to blackmail.

What is your perspective? This is how we see it. Shameful indeed!