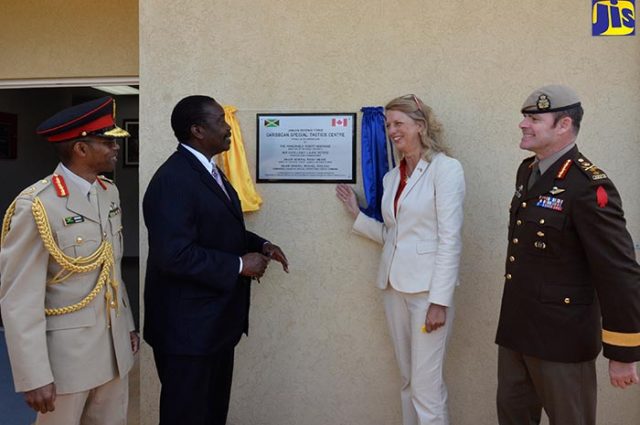 Canada’s High Commissioner to Jamaica, Her Excellency Laurie Peters, has praised the Jamaica Defence Force (JDF) for its stewardship and leadership in strengthening security across the Caribbean.

This, she notes, is based on the “good return on investment” in the resulting outcomes from the Canadian Government’s funding of the JDF’s Centres of Excellence.

The High Commissioner was speaking with JIS News following the official opening of the Caribbean Special Tactics Centre (CSTC) at the JDF’s training camp in Moneague, St. Ann, on March 26.

The CSTC, which is the JDF’s newest Centre of Excellence, was established in collaboration with the Canadian Armed Forces (CAF) and funded under the Global Affairs Canada (GAC) Capacity Building Programme.

The facility is designed to provide advanced military tactics and techniques training to members of the Caribbean’s armed forces.

Ms. Peters said Jamaica was chosen to host the CSTC, based on the JDF’s track record of success recorded at its other Centres of Excellence, which were established with Canadian funding support over the last several years.

“The JDF has performed highly and delivered fruitful rewards at its other centres. (It) has been able to take the Canadian expertise and apply it, not only to the domestic context, but to the regional (with potential outcomes for the) global context,” she stated.

In this regard, the High Commissioner contended that it was a logical decision to establish the CSTC locally, “because Jamaica is considered a leader in the Caribbean, and anything that we (Canadian Government) can do to bolster and facilitate that leadership role, I think, makes sense for all of us.”

Ms. Peters noted that the CSTC’s establishment reflected years of partnership and collaboration forged between the countries, and “serves to highlight Canada’s ongoing commitment to strengthening regional security.”

Ms. Peters said she is optimistic that the CSTC will serve as a hub for regional defence cooperation and enhanced interoperability which will strengthen security across the Caribbean and, by extension, the Western Hemisphere.

She assured that the High Commission remains committed to collaborating and cooperating with the JDF and other Caribbean armed forces to facilitate expanded training engagements and promoting regional and global peace and security, adding that the CSTC is pivotal, in this regard.