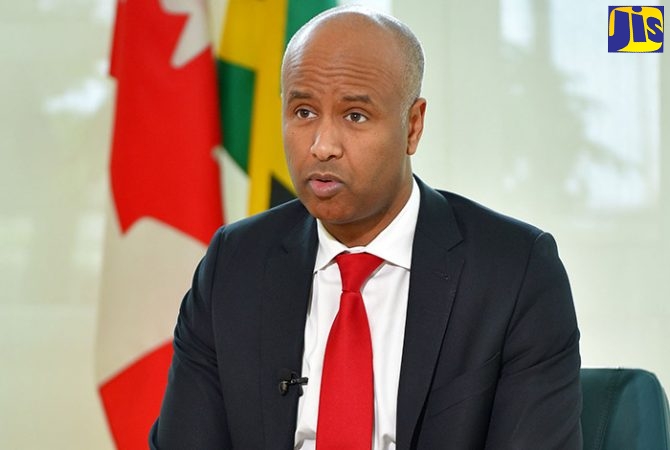 Ties between Jamaica and Canada should be further strengthened with the expansion of various economic immigration programmes.

This was noted by the Minister of Immigration, Refugees and Citizenship for Canada, Hon. Ahmed Hussen, who is in the island for a two-day official visit May 21 to 22.

He also participated in the Seasonal Agricultural Workers Programme (SAWP) departure ceremony, held on Tuesday (May 21) at the Ministry of Labour and Social Security Overseas Employment Centre in downtown Kingston.

The SAWP is an overseas employment programme under the Ministry of Labour and Social Security. It involves contractual agricultural workers who are recruited to meet the short-term demand of manual labour during planting and harvesting seasons.

In an interview with JIS News at the Canadian High Commission, Mr. Hussen said the Canadian government has introduced new programmes “to spread the benefits of immigration to the regions and not just to the main cities”.

“In January, I announced the first Rural and Northern Immigration pilot programme and we will be announcing the winning communities soon,” he said.

Additionally, he said that Canada has announced a new pilot programme in its 2019 budget for non-seasonal agricultural workers in three industries, including the meat and butcher industries.

“Those industries were facing severe shortages of workers, and so this is another way we would like to address that gap and how Jamaica fits into that. I am interested to have those discussions with my counterparts,” he added.

The Minister praised the SAWP, which he said has allowed Canadian farmers to succeed and Jamaicans to benefit from working in the agricultural sector in Canada.

“It is an example of how migration and immigration policies can benefit both countries,” he said.