Cayman Kelly, Shares Thoughts on Some of His Favorite Summer Interviews

WASHINGTON, July 28, 2022 /PRNewswire/ — Radio veteran Cayman Kelly has had a busy summer recently welcoming legendary R&B group New Edition on his popular SiriusXM radio show, along with visiting the Essence Festival of Culture to meet up and interview a range of other celebrated Black musicians and talent. Heart & Soul regularly features in-depth interviews with Black music talent while spinning adult R&B hits from yesterday and today. 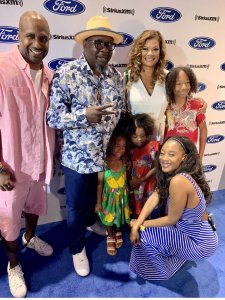 “I’m a longtime fan of New Edition,” said Cayman Kelly. “Their work is epic and super important because they’ve made lasting contributions to the advancement of American music, while bringing joy and hope to listeners everywhere. No doubt about that. Plus, you know, it was a blast – it’s New Edition! I got to hang out with ALL 6 of the guys! It’s surreal to me that the guys I grew up listening to are now my friends! How crazy is that?!”

Originally formed by Bobby Brown in 1978 with Ricky Bell, Michael Bivins, Ronnie DeVoe, and Ralph Tresvant, New Edition reached the absolute heights of musical popularity in the 1980s, with their first album – scoring hits like “Is This the End,” “Popcorn Love,” and “Candy Girl.”

New Edition went on to secure its place in history with other important songs like “Cool It Now,” and “Telephone Man,” before becoming certified double platinum in the United States. Evolving through the years – despite a series of management controversies, interpersonal setbacks, and band-member shifts – New Edition remains one of the most significant African American groups to come out of the 1980s American R&B boom.

We talked about all of the above, while taking a trip down memory lane up to present times. We played all of the hits from the group and the group in their various iterations as solo artists and beyond. The interview can be accessed On-Demand on the SXM App.

“During another show in New Orleans for the Essence Festival of Culture, I interviewed other great Black talent too, like Tank,” said Kelly. “I’ve known Tank for a long time – been following his career since the beginning. He’s a fantastic guy. Tank released some new music you have to check out: ‘Slow.’ Pretty steamy stuff, but definitely a hit in the making.”

“And during the festival, Tamar Braxton also stopped by for a chat. While later, Bobby Brown and his whole family gave us a visit to talk about their new ventures that include their new series on A&E and the Bobby Brown Foods Company. They’ve all been supporters of the show as past guests – so it was just really meeting up with old friends. Especially since this was the first live Essence festival since the pandemic started. We were all happy to be back.”

“I also wanted to give a shout-out to some other artists we spoke with like Rotimi, Kim Fields, Sherri Shepherd, and Earthquake. Rotimi has a new album everyone should be listening to, ‘All or Nothing.’ And Sherri is starting a new talk show coming this Fall. Kim is on Netflix with ‘The Upshaws,’ and Earthquake is one of my voiceover brothers and SXM family, as well as fellow Washingtonian, not to mention one of my favorite comedians, now has a standup comedy special produced by Dave Chappelle on Netflix as well.”

“My show on Heart & Soul has allowed me to meet and speak with a whole range of Black talent, from Academy Award-winning actors to legends in music, TV, and comedy,” said Kelly. “It’s certainly a privilege and a lot of fun. But during times like now, I’m also reminded of how crucial this work really is for the future. Because it allows me to help amplify the message of each of these artists and, by doing so, encourage a whole new generation of listeners.”