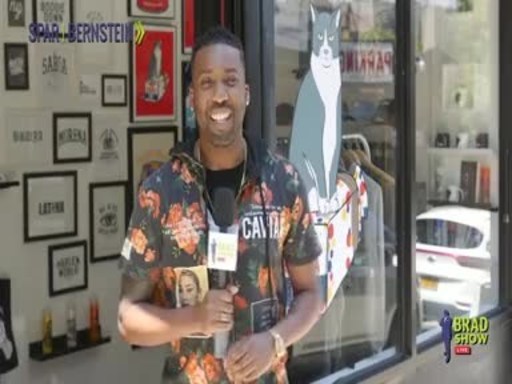 NEW YORK, June 7, 2019 /PRNewswire/ — Tony Peralta never disguised his shortcomings in subjects such as math or science while growing up. He did, however, excel in drawing, and he acted on his passion by enrolling in several art classes. Today, Peralta is a celebrated Afro-Latino contemporary artist.

“I’ve been drawing all my life,” Peralta recalled of his past on Brad Show Live. “Drawing and art were the only things I was good at when I was younger. In school, I wasn’t always the best student. I figured out later in life that I was a visual learner.”

The acclaimed artist works out of his flagship studio, titled the Peralta Project, which is located in uptown Manhattan. His studio doubles as a store, and invites customers to purchase custom-styled clothing in addition to an array of pins, prints, hats and home goods.

His skills as a graphic designer were truly harnessed after college, he explained on Brad Show Live. Drawing inspiration from hip-hop and his Dominican culture, Tony united his two worlds to create his own, stand-out brand consisting of bold, vibrant designs.

Born to Dominican parents, Peralta’s mom and dad came to America to free themselves of a life of poverty.

“When you grow up in an immigrant culture, they [immigrants] teach you not to take risks. It’s like you have to get a job. But, they [my parents] both came here without speaking the language, not knowing anybody. I feel like now, by being an entrepreneur, I am honoring them by taking the risk of opening up a shop and doing the stuff that I do.”

Peralta’s success in the art world has only continued to grow. Recently, he was recognized at the New York City Dominican Parade, had designed sports jerseys for Nike’s Soccer City Clash, and his work was featured in ‘I Am Other,” a multimedia creative collective launched by Pharrell Williams. His exhibit, “Reconnected,” which was an ode to the Dominican Republic, was also featured in the New York Times.

Catch the full interview on YouTube and Facebook with host Brad Bernstein! Brad Show Live is a 2019 Webby Honoree that airs Monday-Friday at 5:30 p.m. ET!