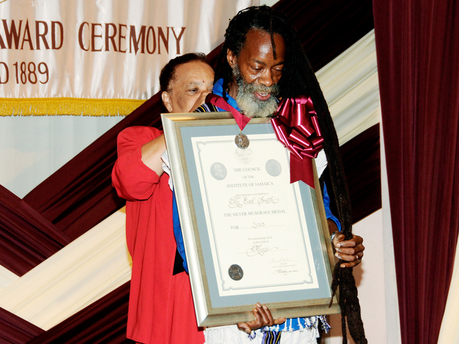 It’s going to be called ‘Binghistra’. That’s the latest project from legendary reggae musician Earl ‘Chinna’ Smith as he continues a journey started more than four decades ago.

“Is like getting Nyabinghi with an orchestra,” he explained. “Mi a try because we really have to do something different.”

Smith was speaking to The Gleaner yesterday after receiving his Silver Musgrave Medal at the Institute of Jamaica in downtown Kingston.

Smith explained that Binghistra would incorporate that famous Nyabinghi drums with classical instruments.

His acoustic series Inna De Yard, held in his Kingston home, is the place to hear roots legends like Kiddus-I, The Mighty Diamonds, plus a myriad of studio sessions, countless shows and many notes played. His latest project still brings a sparkle to his eyes.

“What happen (musically), happen already,” said Smith. “We woulda like add something new to the ting.”

Fellow Jamaican music pioneer Reinford Lee ‘Scratch’ Perry, who was absent from the event, received a Gold Musgrave, along with Prof Franklin Knight (contribution to Literature).

At the ceremony, the cheers and applause were practically non-stop as Smith was called to the stage to receive his medal and citation.

A true showman, he at first stood arms akimbo, smiling; that garnered a few more “Yes Chinnas” from the audience. They were on their feet as he accepted the award.

Smith was cited for playing an integral role in the development of reggaemusic. He has worked with some of the genre’s biggest acts, including Bob Marley, Dennis Brown, Augustus Pablo, Ras Michael and the Sons of Negus, Jimmy Cliff and Sly and Robbie.

Smith, born and raised in Greenwich Farm in Kingston, was a much sought-after studio musician in the 1970s and has gone on to perform on more contemporary albums, including The Miseducation of Lauryn Hill (which earned Album Of The Year honours at the 1999 Grammy Awards), andFrank, with the late British singer Amy Winehouse.

Despite the extensive repertoire, Smith was still surprised to be recognised in this fashion.

“I feel good, to be honest with you,” he smiled. “It’s unexpected you know. But the fact that it come like this, I man appreciate it, big time!”

However, Smith said he was not surprised to be in the business for a little over 40 years because he wasn’t “checking time like that”.

After being involved in reggae essentially from its embryonic stages, Smith has seen, done, and played it all. But he refused to say that the ‘old-time reggae’ was better than current material.

“Young become the old, and mysteries do unfold. Everything must change,” he said philosophically.

“We have created something, so our duty is to preserve what we have and add to it.”

He credits “the energy of the Most High”, eating right and proper sleep (a miracle he gets any considering he still tours heavily) as the reasons for his longevity.

For the original report go to http://jamaica-gleaner.com/gleaner/20131017/ent/ent1.html