Plea Bargain, Is It Barstardising The Legal Profession ?

Chris Gayle Should Make His Bat do the Talking.

It was only a week ago, while writing about the likely intoxication,  and revengeful nature … if not vindictiveness of Dave Cameron that we used Chris Gayle as an example of how the type of conduct perceived by many to be that of Cameron’s, has helped to destroy West Indies Cricket.  It is not only Gayle who has returned but also Fidel Edwards. Edwards like Gayle was exiled during Cameron’s tenure as head of West Indies Cricket.

We welcome back Chris Gayle et al who since 2019 has not played for the West Indies team. We are not sure iff Fidel Edwards’ period of exile was longer than Gayle’s. We are eternally grateful to Ricky Skerrett and his team for their leadership in attracting back these proven stars..  Dave Cameron is still trying to further destroy West Indies Cricket from the sidelines. Alas! God is alive and will like He did with Saul on the Road to Damascus to wreak destruction … we hope He will stop Cameron in his tracks.  We say to you Dave Cameron, take a dignified visit to the potty lou and do enjoy the aroma. You need to mend your ways. You are not winning many friends according to Dale Carnegie’s definition of same. He clearlly sets out a road map in his best selling book:. “How To Win Friends And Influence Others’.  This book is recommended to you Mr. Dave Cameron.

Chris Gayle is the most prolific  T20 batsman in the world..  The mere prospect and likely presence of Gayle’s selection for the upcoming tour of Sirlanker to the West Indies and Gayle’s likely selection to the team,  gives us hope of success and could send gitters through the camp of our visitors.  Gayle is a match winner.  No questions asked.

Fidel Edwards’s contribution as bowler,  will be examined in more detail at a later date. This is Gayle’s day. 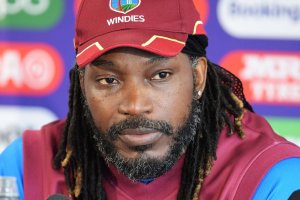 We say to Chris Gayle,  the “Master Blaster” you are free like all of us to express your views, but we would prefer if you allow your bat to do most of the talking.  Ricky Skerrett is a genius and we have a lot to thank him for.  Let Cameron go eat his heart out.

There are great expectations at the impending return of Chris Gayle to regional cricket.  This would make Charles Dickens’s book appear to be nothing to talk about or a new mom awaiting the arrival of her first born.  As in his book “Tales of Two Cities,”  Dickens starts by saying:.

“It was the best of times and the worse of times … “

A period of revolutionary ferver.  We experienced the “Winter of dispair” under Dave Cameron. We lost so many matches and series that we could best be described as the “losing team.”. The self-respect of a people sank to almost zero under Cameron’s leadership of West Indies Cricket. It was not only his leadership, but the divisiveness and lack of gentlemanly conduct he displayed, that sank the game to it’s lowest level. In our hay day we were once feared and respected. We were the team to beat. All this changed and Cameron, although three terms at the helm of West Indies Cricket did not change our fortunes.  We could say without contradiction it worsened.

There was questionable financial decisions as audits have revealed.  Cameron has nothing to be proud of for having served three terms at the helm of Regional Cricket. Did he do more harm than good?  Our jury is still out.

Already potentially lucrative four TV and related deals have been entered into by the Skerrett Team.  They are creating miles between them and Cameron’s team. It is like a long distance runner lapping his competitors in a stadium.  West Indies Cricket is on track for a bright future going forward.

Long live Ricky Skerrett and his team. May you continue to reap great rewards for West Indies Cricket. You will be crowned blessed on judgement day.

Hopeton O’Connor-Dennie is a veteran journalist and a cricket enthusiast who also played the gentleman’s game. He has international exposure.