SAINT LUCIA LAUNCHES NEW OPTION FOR ‘LIVE IT’ EXTENDED STAY PROGRAM: MULTIPLE ENTRY UP TO ONE YEAR INVITES VISITORS TO LIVE LIKE A LOCAL

Toronto-based filmmaker Chris Strikes marks his feature length debut with Becoming a Queen, a 109 minute documentary that world premieres at this year’s CTFF (CaribbeanTales International Film Festival). Strikes’ new film – which is the festival’s Opening Night film (September 8th) – stars Joella Crichton who’s dream is to be Caribbean Queen of Carnival in Toronto for the tenth time, a feat that has never been done before. She has a skilled team behind her and devoted fans cheering her on, but also keen, and younger competitors vying for the title. Her title. 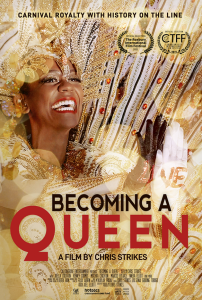 Becoming a Queen takes us inside Toronto’s world-famous Carnival, an annual celebration of Caribbean pride and identity in this ultra-multicultural city. Among the biggest events of its kind in the world, Toronto’s Carnival draws participants and tourists from across the Caribbean, Europe, and all over North America. Becoming a Queen invites viewers to experience Carnival through the eyes of Joella and her tightknit team. And at its centre is the King and Queen competition that Joella has been preparing for. This is where the real artistry of Carnival is. A much-misunderstood event, Carnival has suffered from racial prejudice from the wider community and struggles to maintain the funding necessary for such a wide-scale event. Becoming a Queen engages with this prejudice, through the eyes of the very people who look to Carnival as a profound expression of identity and cultural pride. A key theme in Carnival is the rejection of European standards of beauty and of body image and a defiant Caribbean-flavoured feminism runs through Joella and the women around her as they prepare for the competition. There is a lot more to Becoming a Queen than amazing outfits, glamour and pageantry, as it sparks a discussion of Caribbean diaspora identity and culture in the 21st century.

Chris Strikes is an award-winning director who began his career in music videos working with top Canadian and international artists, including Nelly Furtado, Kardinal Offishall and Machel Montano. In 2013, Chris was MMVA nominated for Pop Video of the Year for “Turn It Up” by Kardinal Offishall. In 2017 Chris’ animal awareness music video “Chains of Silence” for Stephanie Braganza won Best Music Video at both the Global Music Awards and the Merit Awards of Awareness. Strikes expanded to producing and directing short narrative films, which have screened in festivals in Cannes, London & Manchester UK, Toronto, Halifax, Hamilton and LA. In 2019, Strikes was accepted into the HotDocs Accelerator Fellowship. He was also one of only six recipients of HotDocs’ first CrossCurrents Canada Fund, with his first feature length documentary BECOMING A QUEEN. Strikes was also accepted into Reelworld’s E20 program.

Actor, advocate and nine-time Queen of Carnival winner, Joella Crichton was practically born into Carnival. A Toronto native and graduate of York University’s Acting Conservatory, Joella is passionate about her Vincentian heritage and began competing in the Queen of the Bands competition in 2005 at the youthful age of 18. Between 2011-2017, competing for Carnival Nationz, Joella went on a streak of seven consecutive wins in Queen and nine wins in the last ten years heading into the 2018 competition. She has been one of the most consistent and dominant performers in either the King or Queen categories in Toronto’s Carnival.