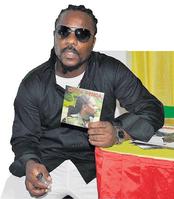 The album is produced by reggae producer John John, and according to Chuck Fenda, the album is a collector’s item.

“The vibe that we hold on this album is spiritually deep, that is why John John and I decided to call it Jah Element,” the popular artiste said.

He further said that he grew up listening to some of the artistes who are featured on the album and it is a sense of accomplishment to have collaborated with them on his new project.

On the album, Bounty Killer and Leroy Smart are featured on a social commentary effort called Badness No Pay, while Junior Reid is featured on Spiritual Warfare.

“In this time, we need to uplift reggae and carry it on. The people need this message that I am saying, they need this inspiration. A long time an album nuh buss a Jamaica, mi wah know sey all di man wey deh pon di sidewalk a play Fenda CD,” the artiste told THE STAR.

Jah Element is available online at most online music stores. However, tangible copies of the project can also be purchased at Derrick Harriot, Music Mart, among other places.

For the original report go to http://jamaica-star.com/thestar/20131022/ent/ent2.html