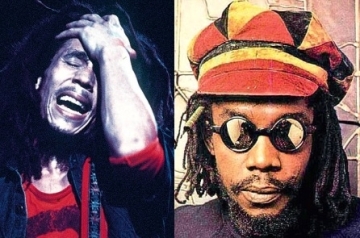 THE resurgence of rock superstar Eric Clapton during the mid-1970s is revisited in a six-CD, multi-track set titled Give Me Strength: The ’74/’75 Recordings.

The album, which will be released on November 22, contains four versions of I Shot The Sheriff, the Bob Marley original Clapton covered for his landmark 1974 album, 461 Ocean Boulevard.

Clapton’s version topped the Billboard magazine chart and sparked a career revival for the singer/songwriter who made his name in the 1960s as a member of British blues-rock groups the Yardbirds and Cream.

One in Every Crowd, which was recorded in 1975 at Dynamic Sounds in Kingston.

The latter includes a version of the Peter Tosh staple, Burial.

On disc three, there is a live version of I Shot The Sheriff which was recorded at Long Beach

Clapton, regarded as one of rock’s great guitarists, was encouraged to record I Shot The Sheriff by a member of his band.

After initial reluctance, he put a rock spin on the song Bob Marley and the Wailers originally recorded

The song not only went to the top of the United States pop chart, it resuscitated Clapton’s career which had been stalled by alcohol and substance abuse.

He recorded I Shot The Sheriff at a time when roots-reggae was taking off internationally. Other major pop acts including Paul Simon and the Rolling Stones

also experimented with the Jamaican sound.

For the original report go to http://www.jamaicaobserver.com/entertainment/Clapton—Rolls-down-reggae-boulevard_15182072