Codes of Practice to Protect Persons with Disabilities 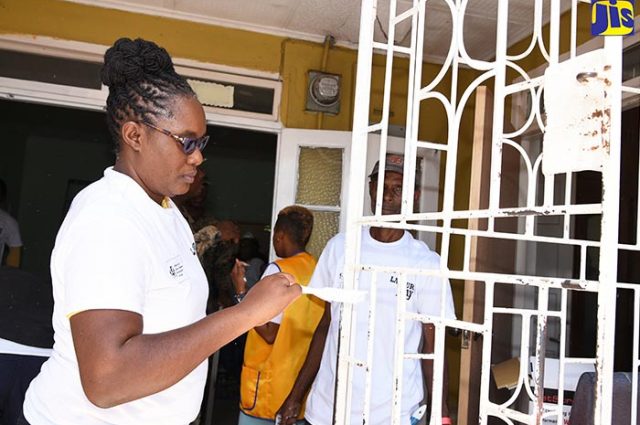 Executive Director of the Jamaica Council for Persons with Disabilities (JCPD), Christine Hendricks, assists with the painting of the Cumberland Road Health Centre in Spanish Town, St Catherine, on Labour Day (May 23). The health centre was one of two projects that received national focus during this year’s Labour Day activities.

Workplaces will be better equipped to deal with persons with disabilities when the Codes of Practice is completed.

The document will guide employers on how to ensure that the employee is not at a disadvantage.

The Codes of Practice will provide minimum standards by which the public will be guided on how to interact with, and allow for the participation of persons with disabilities. It is a component of the Disabilities Act which was passed in Parliament in October 2014.

The Jamaica Council for Persons with Disabilities (JCPD), an agency of the Ministry of Labour and Social Security, is developing the codes, so as to expand the level of participation in the society by persons with disabilities.

Executive Director of the JCPD, Christine Hendricks, tells JIS News that the Council is in the process of drafting the first two Codes of Practice – Education and Training, and Employment.

“This should be finished by mid-year into the latter half of this year, so by year end we should have those two done already,” she notes.

Mrs. Hendricks says the rules will provide the public with practical guidance on how to include persons with disabilities in the two critical areas.

“It is not going to be a legal document. It’s going to be a practical document that any Jamaican can pick up and utilise. It is to provide that support to the Act, so that persons know what this inclusion of persons with disabilities means,” she adds.

The Executive Director points out that sometimes persons are hesitant to employ or have persons with disabilities in the classroom, because “they don’t know how to deal with them, and, as a result, they exclude them”.

She notes that the hesitancy by some persons to employ persons with disabilities often comes across as discrimination.

Steps are also being taken to improve the level of access for the physically challenged in schools. A budget of $50 million has been earmarked by the Ministry of Education, Youth and Information to equip schools with wheelchair ramps.

A ‘Ramps for Schools’ project, which was launched on Labour Day, May 23 at the St Ann’s Bay Infant School, aims to install two in each of the island’s 63 constituencies.

“It’s an excellent move by the Parliament of Jamaica, having accepted the Motion moved by Senator Floyd Morris, who has been an excellent champion, making sure the disability agenda gets moving at the highest level,” Miss Hendricks says.

In March 2018, Senator Floyd Morris, who is visually impaired, moved the motion calling on the Government to use Labour Day 2018 to build ramps in schools. The motion was accepted by members of the Upper House, following which the Minister of Education, Youth and Information, Senator the Hon. Ruel Reid, issued the charge for the National Education Trust, working with other partners, to implement the project.

Mrs. Hendricks says that access to schools, health centres and other facilities by persons with disabilities is very important to Jamaica’s development and achieving the goals in the Vision 2030 Jamaica – National Development Plan.

“It is my hope that it (Ramps for Schools) doesn’t just stop at schools and health centres, but that it permeates throughout the society, that anywhere I go as a person with a disability, I can go and shop like anybody else because I can have access to the space,” she says.

Meanwhile, Executive Director of Combined Disabilities Association, Gloria Goffe, also wants to see a continuation of the building of wheelchair ramps, especially in those schools that do not have accessible features.

Miss Goffe is also appealing to persons to follow the guidelines when constructing wheelchair ramps, noting that there are complaints of ramps being built “either too steep, too narrow, too high, too wide or too smooth”.

The Executive Director emphasises that wheelchair ramps should have non-skid surfaces.

She is also calling for the installation of more kerb cuts adjoining the streets, while lamenting that some are not being constructed to specification.