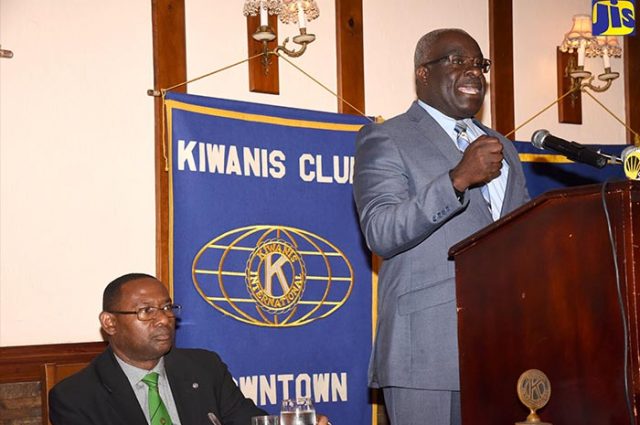 “I believe that the zones of special operations have been very successful. When you speak to the persons within the communities and they are able to do things that they could not normally do without being fearful, then I would say if that is a measure of success, then we have been (successful),” he said.

Colonel Pryce was responding to questions posed during the Kiwanis Club of Downtown Kingston meeting at the Hotel Four Seasons in St. Andrew on March 26, regarding the effectiveness of the zones.

“Look at Mount Salem. There have been no significant problems in Mount Salem. In Denham Town, the mayhem that preceded the declaration as a zone, compared to what is happening now, is cheese to chalk,” he said.

Colonel Pryce said everyone has a role to play in reducing acts of criminality within the society. “There are fewer of them than us, and if we unite against this scourge, we can eliminate it and we will,” he added.

The declaration of a zone of special operation is made possible under Law Reform (Zones of Special Operations), (Special Security and Community Development Measures) Act, which was passed in the Houses last year and allows the security forces – military and police – to operate under special conditions in the designated geographical area.

It seeks to contain crime while safeguarding the human rights of residents and promoting community development through social intervention initiatives.

The law gives the Prime Minister power to declare an area a Zone of Special Operations in order to tackle increased crime and volatility in a community. This is in consultation with the National Security Council.

The zone can only be established after the Police Commissioner and the Chief of Defence Staff make a request for such a declaration in writing to the Prime Minister.

In the meantime, Colonel Pryce called on social and service clubs, such as the Kiwanis Club, to become more involved in programmes that will guide youngsters away from crime and violence.

“A lot of criminal acts that are being perpetrated are being done by youngsters from 13 to 24 years of age. These are the young minds that are impressionable,” he said.