LIFEWTR® Partners with Issa Rae to Launch “Life Unseen™,” a New Platform for Fair Representation in the Arts

Di-Ruption Channels his Experiences Into a Stunning Single Titled, “From That Place”

Consult Your Medical Doctor And Get The Covid Vaccine

A 96 percent vaccine takes up in the target group in Jamaica.

Forty Nine thousand jabs have been administered in Jamaica so far. As you may be aware Jamaica got 50, 000 doses of the Ascazenica vaccine from the Indian government to the Jamaican people, an independent state, as a gift.  To date a 96 percent vaccine take up has been reported by Health Minister Dr. Christopher Tufton. 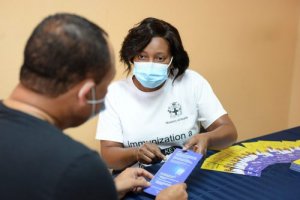 There is comprehensive information in the attached brochure which is given to all prospective vaccine recipients.  So far some 49, 000 doses have been distributed to healthcare workers, members of the security forces, other frontline and related professionals, including seniors.  Twenty million doses of the Astrazeneca vaccines have been taken up in the United Kingdom alone. By and large the Ascazenica vaccine has been safe, based on post vaccine reports from patients who got the jab.

Age sixty and over, for the 600 deaths 98 percent of those senior deaths had at least one comorbidity. For example diabetes, HIV and cardiovascular disease.

One hundred and Thirteen percent take up. Target 15,000. To date 17,000 plus. Quite a successful take up by healthcare and frontline workers.

Kenya has accused UK of discrimination as there is vaccine apartheid.  UK has a ban on Kenyans from traveling to UK.  There is vaccine hoarding by some first world countries.  Vaccine inequity has been practiced over the world.

There are reports of a 28 day lock down on Ontario, Canada as the strain from Britain seem to be affecting the northern regions of the Americas. Ontario has a population of 14 million persons.  They have a greater Ontario region that is a vast land mass.

There is a steady decrease in hospital stays.  This is a good sign.

Fifty percent decline in positivity rate.  We are at 17 percent now April 8, 2021.  Our target is 5 percent.  We were over 30+ positivity rate about two weeks ago.

Got my jab yesterday,  Wednesday 7th April 2021. It was the Ascazenica brand at the Stony Hill Health Centre. There have so far been no serious negative repercussions.  Today April 8, 2021,  I am feeling a bit sleepy and that I am told by my personal doctor is a natural reaction.  Other than that I am feeling excellent. As a senior I feel good that I have a measure of protection from the coronavirus.  My advise to seniors, and all, do the responsible thing and get protected. If you are not fully informed, just check with your medical doctor or healthcare professionals.  Do not allow rumours to derail your plans at being vaccinated. It could save your life

There are reports of blood clotting which have been reported allegedly from taking the Ascazenica brand of vaccine.  Such seem to be the experience of a very small percentage of patients.  Get the correct information and banish rumours.  Vaccines have been around for decades.

What makes up a Vaccine?

In a nutshell we are told that vaccine doses are taken from extracts of the virus itself. In the case of the Astrazeneca brand you need two doses based on studies to be fully protected. This should be seen as an emergency and we need to treat it seriously as our economy has taken a dramatic downturn because it has been hit badly.

It would be good if we could try as soon as possible to achieve herd immunity. The Corona Virus has been causing a health emergency worldwide, Jamaica is no exception.

Hopeton O’Connor-Dennie is a veteran journalist who has International exposure and now a COVID jabber or recipient.