Since its premiere over two months ago, Macka Diamond’s Big Woman vs Yung Gyal single has been getting extremely good traction both in Jamaica and overseas. The track inspired my Macka’s own ageism challenges in the industry speaks about the positive benefits of dating an older woman versus a younger female. The catchy lyrics and beat are also the reasons the song organically started trending from its inception. 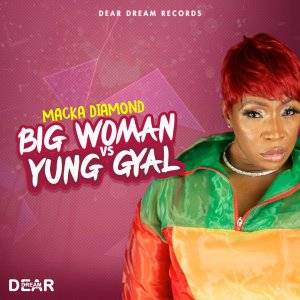 “The song is being loved by both grown folks and young fans alike, but its definitely the anthem of women over 40 years old. They needed a song like this to celebrate their mature beauty, as we say – wi old but wi nuh cold,” Macka explained

Big Woman vs Yung Gyal has now inspired multiple counteractions from both female and male artistes. Mikeylus, Yaga Tee and Nefatari are the major counteractions thus far, with songs defending the young girls to one that speaks to big men vs young boys. Macka, who is known early in her career as the counteraction queen when she was called Lady Mackerel, sees these counteractions as testament to the hit potential of the track.

“When I counteract songs I only go after the hits so the fact that these artiste chose to counteract Big Woman vs Yung Gyal means I’m doing something right and I am appreciative of every song inspired by my single,’ Macka added

The Big Woman vs Yung Gyal is available for purchase digitally globally and is produced by Social Media Viral giants Deardream. The track will also benefit from unique visuals in the coming weeks.