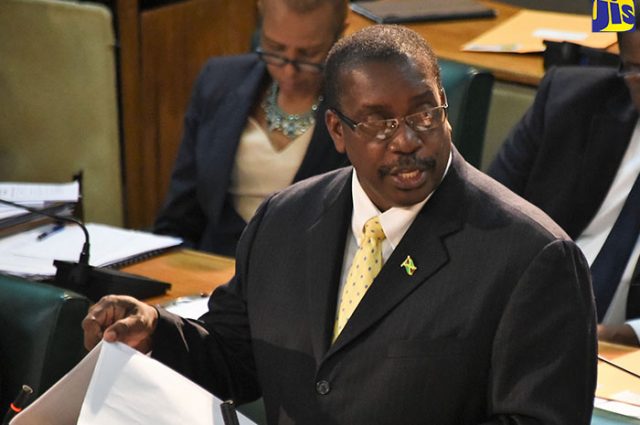 National Security Minister, Hon. Robert Montague, speaking during the sitting of the House of Representatives on Tuesday (January 23).

The Government will be pushing several critical pieces of legislation through Parliament this year that are aimed at strengthening crime-fighting.

Among them is the Bill to establish the Major Organised and Anti-Corruption Agency (MOCA) as an independent law-enforcement entity.

National Security Minister, Hon. Robert Montague, said the MOCA Bill has already been tabled in the Lower House by Prime Minister, the Most Hon. Andrew Holness, and is scheduled for debate next Tuesday (January 30).

He was speaking during the sitting of the House of Representatives on Tuesday (January 23).

Minister Montague also informed that the Firearms Act is being reviewed and will be brought before Parliament in three months.

“The amended legislation will feature new penalties and harsher mandatory minimum sentences. This is the way to go, considering that the gun features in 80 per cent of all murders in Jamaica,” he explained.

The Minister also intends to take to Parliament, in short order, a Bill to merge the Police Services Commission (PSC) with the Police Civilian Oversight Authority (PCOA).

“This was one of the recommendations arising from the Strategic Review of the Jamaica Constabulary Force (JCF) in 2007. We have set ourselves six months to do so. The revamp and realignment of these two institutions will establish a more robust oversight body, which will help to drive accountability within the JCF,” Mr. Montague noted.

He further informed that within six months, the Police Service Act will be tabled in Parliament, which will replace and repeal the 150-year-old Jamaica Constabulary Force (JCF) Act.

The objective, Mr. Montague said, is to break with the past and “create a modern police service befitting our times, and to better protect the members and serve the public”.

Meanwhile, the amendments to the Finger Print Act will be completed within eight months.

“The Anti-Gang Act is being amended to allow for a watch list to be established as well as the implementation of control orders against suspected criminals. We are also pursuing amendments to the Proceeds of Crime Act that seek to have persons explain sudden wealth. These two pieces of legislation should be ready in 10 months,” Minister Montague said.

He added that the Government is pursuing, immediately, a joint programme against tax cheats who are suspected of funding criminal activities.