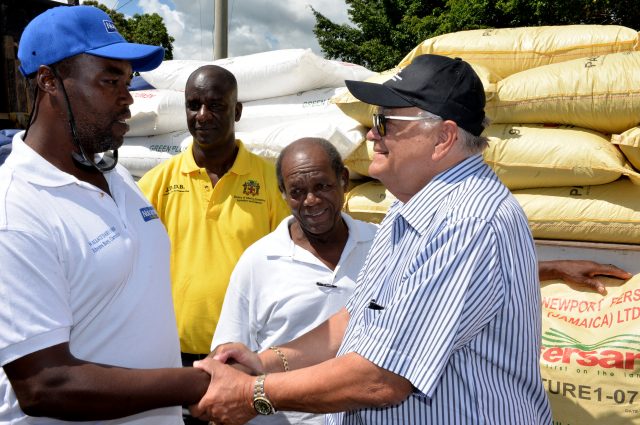 Minister of Industry, Commerce, Agriculture and Fisheries, Hon Karl Samuda (right), greets dairy farmer Oral Wallace (left), during a ceremony for the handing over of $5 million worth of fertilizer to dairy farmers from Clarendon, St. Elizabeth and St. Thomas at the Rhymesbury Cooperative Building in Clarendon on Friday (February 16). Looking on are Chairman of the Jamaica Dairy Development Board (JDDB), Donald Elvey (2nd left); and Chairman of the Rhymesfield Dairy Farmers Cooperative, Derrick Walker.

“If we don’t find the answer to bringing our average production up from where it is now to a minimum of eight to 10 litres (per cow) in the country, we are not competitive,” he noted.

“You are not going to be in a position to offer the product to the processors at a price where they will make money and be able to pay you more,” the Minister added.

He was speaking at the handing over of $5 million worth of fertilizer to dairy farmers from Clarendon, St. Elizabeth and St. Thomas at the Rhymesbury Dairy Farmers Cooperative building in Clarendon on Friday (February 16).

It will improve the quality of the grass consumed by the cattle and thereby enhance the amount and nutritional value of the milk produced.
Minister Samuda said the Government will be providing support to the sector as it looks to increase production to 20 million litres of milk by 2020.  Some 13.13 million litres were produced in 2017.

“We must assist farmers to get inexpensive capital;  money that does not overburden them. The Development Bank of Jamaica and the People’s Cooperative Bank are coming into play to assist farmers in getting capital that is affordable,” he said.

He noted further that “we have to pursue a collective strategy between the Ministry, Rural Agricultural Developmental Authority (RADA) and the dairy board to see how best we can mix our resources to ensure that the farmers get irrigation water.”

He further gave the farmers of Rhymesbury his commitment to repair damaged roads as soon as possible.

Minister Samuda commended the JDDB for its role in expanding the cattle population through the heifer redeployment project.

He also lauded the organisation’s commitment towards sustainable development of the dairy industry.

Managing Director of Newport Fersan, Dennis Valdez, said his company takes its role in the development of the agricultural sector seriously.

“We are constantly looking for ways to improve ourselves and the lives of our farmers,” he noted.