In what is shaping up to be a bitter feud between the Auditor General and the Chief Executive Officer of the Firearm Licensing Authority (FLA) has been heating up.

The Auditor General reported to Parliament that JA $8 Million was paid out in termination benefits to dismissed employees of the FLA. The Auditor General published a report after there were amendments to these employment contracts by mutual agreement between employee and employer.  Provisions in the employment contract makes room for this under Section 9 of the FLA act. 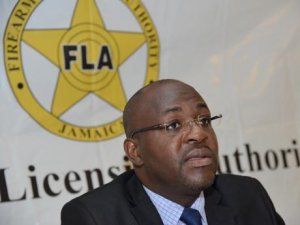 “Some five (5) million dollars was saved by the FLA.”  According to the CEO Shane Dalling.  There is no need to give a reason when there is no cause, because there was no cause. The contract makes provision for this.  Cause or no cause. There is nothing illegal about this.  The terminations were by mutual agreement.”

“This was a deliberate attempt to mislead and make the AG department look good.”

Mr. Shane Dalling has rejected her findings with regard to the termination issue.

Shane Dalling,  the Chief Executive Officer of the Firearm Licensing Authority (FLA) is also a lawyer, has come out swinging against the Auditor General and has invited parliament to investigate the matter urgently.

No one should be seen as being above scrutiny. The Auditor General cannot be allowed to be seen as above scrutiny either. Her report can ruin careers.  This latest FLA audit report appeared on the front page of one of our leading dailies.  Shane Dalling was very annoyed yet controlled in his objections to Ms. Panella Monroe Ellis.  the Auditor General who published her report on the 2017/18 FLA Audit despite being advised of possible error (s).

“Any adverse findings have been cleared up as the FLA is quite responsive to matters of this nature.  There was a missing book of records, which was secured elsewhere due to removal issues.  The book has since been found. The records are now being kept electronically.”

Asserts Dalling in his further response to the published AG’s report on the FLA.

It is customary that the AG sends a draft of her audit report/findings so as to allow the entity being audited to answer any questions or clear up any misunderstanding (s) before the final report is signed off on.  This in the case of the FLA was done, but somehow corrections/amendments were not done of these responses from the FLA to the final report before publication. Shane Dalling seem not to be amused.

This error or omission is unfortunate to say the least. Attempts to get a further comment from Shane Dalling was met with no response.  They asked that we send an email.  We were not able to do so to meet our publication deadline.

Hopeton O’Connor-Dennie is a veteran journalist who has an international exposure. He has a keen interest in sound governance