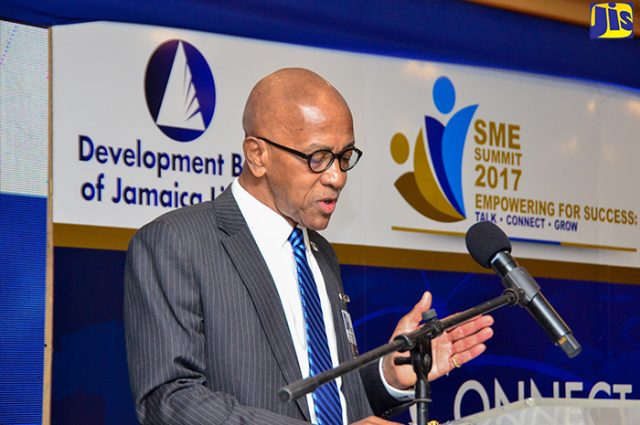 The Development Bank of Jamaica (DBJ) has provided over $8 billion in funding support for businesses islandwide since the start of the 2017/18 fiscal year in April.

Managing Director, Milverton Reynolds, says the funds have been made available through equity funding under the Jamaica Venture Capital Programme (JVCP) as well as through capacity development and technical assistance initiatives.

He pointed out that between April 2017 and January this year, loans totalling $6 billion were disbursed to micro, small and medium-sized enterprises (MSMEs).

Mr. Reynolds also advised that the DBJ issued 1,120 vouchers to entrepreneurs, which enabled them to access $263.25 million.

He noted that under the “revolutionary” voucher programme, hundreds of entrepreneurs are now able to access loans and other forms of funding, “because their businesses have been strengthened”.

Additionally, he said the Bank facilitated 26 business start-ups under its Innovation Grant from New Ideas to Entrepreneurship (IGNITE) programme, which enabled those entities to access $60 million in grant funding, resulting in the creation of hundreds of new jobs.

Mr. Reynolds further indicated that the DBJ has committed approximately US$2.25 million under the JVCP to three private equity and three private credit funds entities, along with over US$233 million from local and international investors for investment in local and regional businesses.

While noting that the Bank is “very pleased by these achievements”, the Managing Director acknowledged that they did not result solely from the DBJ’s efforts, but involved collaborations with AFIs and microfinance institutions as well as fund managers and business service intermediaries.

“Also of tremendous significance is the support from our international development partners, such as the Inter-American Development Bank (IDB), Multilateral Investment Fund (MIF) and World Bank,” he pointed out.

“Over the years, we have developed partnerships with a critical group of institutions and organisations that share our mission, and we are deeply grateful for their support and belief in what we do at the DBJ,” the Managing Director added.

Noting that the DBJ is Jamaica’s foremost development bank, Mr. Reynolds said its role in nation-building is reinforced by “our focus on economic growth and development”.

The National Business Model Competition, which commenced in 2014, encourages and promotes entrepreneurship on the campuses of Jamaica’s colleges and universities.

Participating institutions in this year’s renewal, which runs from March 22 to 23, include the University of the West Indies; University of Technology; Edna Manley College of the Visual and Performing Arts; and Northern Caribbean University, which has won the competition since its inception.

The winner will represent Jamaica at the International Business Model Competition, slated for May10 to 11 in the United States