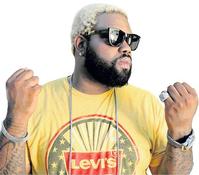 With the demand for dancehall and reggae music growing exponentially across the globe, more Jamaican entertainers are rapidly infiltrating the international space with their unique sound.

Other prominent acts making the playlist includes Mavado, Vybz Kartel and ‘Mr Boombastic’, Shaggy. The revelation comes on the heels of Demarco’s recent launch of his own Vevo channel, DemarcolifeVevo.

In a release to the media Demarco says: “Having your music added to the playlist of the Vevo Top Reggae Mix is an accomplishment within itself, not just for me as an artiste but for the genre on a whole. There are hundreds of international acts on Vevo from which to select, so to be chosen as a representative for the reggae brand is definitely something of value.”

The addition of Demarco’s song to the playlist will see him being exposed to new markets via the various platforms to which Vevo markets. Vevo, LLC (stylised vevo) is a joint-venture music video website owned and operated by Universal Music Group, Google, Sony Music Entertainment and Abu Dhabi Media. EMI Records licensed its content to the service before being purchased by UMG in 2012. It was launched on December 8, 2009. The videos on Vevo are syndicated across the web, with Google and Vevo sharing the advertising revenue.

Recently, Lazy Body clinched the top spot on St Lucia’s Wave 94 FM Top 20 Caribbean Countdown and continues to occupy a spot on that chart, among several others. Gearing up to depart the island later this week, the Fren Circle deejay will headline a concert in Belize City, Belize, before shifting focus to the African continent for a show in Zimbabwe.

Meanwhile, plans are now afoot to shoot a video for the JayCrazie Records-produced Mosquito Mesh, that has been creating quite a stir on the local dancehall scene with the spawning of an accompanying dance created by former dancehall queen, Nickiesha.

For the original report go to http://jamaica-star.com/thestar/20131223/ent/ent7.html