Public-Private Partnership for the Construction of Housing for Health Workers

Diaspora Contributed US$186,000 to Education Sector 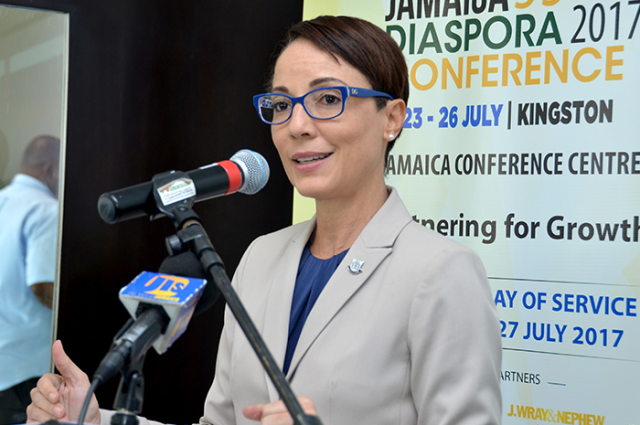 Photo: Minister of Foreign Affairs and Foreign Trade, Senator the Hon. Kamina Johnson Smith speaking at a Jamaica Diaspora Day Breakfast event held on Friday (June 16) at the Jamaica National Financial Centre on Belmont Road, Kingston. The occasion was the launch of a study on the economic value of the Jamaican diaspora, to be undertaken by the Caribbean Policy Research Institute (CaPRI) and the Jamaica Diaspora Institute.

This was reported by the Minister of Foreign Affairs and Foreign Trade, Senator the Hon. Kamina Johnson Smith, while speaking at a Jamaica Diaspora Day Breakfast event held on Friday (June 16) at the Jamaica National Financial Centre on Belmont Road, Kingston.

The event was held to commission a study on the economic value of the diaspora being undertaken by the Caribbean Policy Research Institute (CaPRI) and the Jamaica Diaspora Institute (JDI).

It was also part of activities to observe Diaspora Day celebrated locally and abroad on June 16.

Minister Johnson Smith said the money came from in-kind donations in the form of educational materials, inclusive of books and computers.

“We truly value the sacrifices that many of them make to their families and communities evidenced by their generous gifts, whether through philanthropic donations or sharing of their time, skills and expertise,” she said.

She said that products, such as yams, sweet potatoes, papaya, dasheen, pumpkin, mangoes, breadfruit, callaloo and ackee are now top agricultural exports to the United Kingdom, United States of America (USA) and Canada.

“During the period 2005 to 2015, the USA represented the major market for agricultural exports,” she added.

The Foreign Affairs Minister said that the Government is committed to removing the bureaucratic hurdles that hinder investments.

She cited the Economic Growth Council, which she said was created “to remove the bureaucratic barriers that exists and encourage innovation and a level of pragmatism in our government processes.”

Turning to the study which will highlight the true value of the Diaspora, Minister Johnson Smith said it will enable the government and the private sector to design innovative strategies that are relevant to the Diaspora, taking into account their unique needs and preferences in their respective locations.

“It is imperative that we secure empirical data of the current and potential value of the partnership between Jamaica and its Diaspora,” she stated.