Lex A’llure Bursts on the Scene with Her New Book “The Remodel: Reconstructing My Reality & Repairing Generational Trauma”

PHILADELPHIA, March 3, 2022 /PRNewswire/ — Exponent Agency (www.exponentagency.com) revealed details of the upcoming premiere of a new 8-bit indie video developed by Tethra64 and Coolaidhippy along with an electronic foray into the augmented and virtual reality space, with a fully interactive live concert set for April 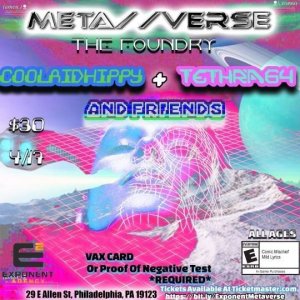 17th in Philadelphia at The Foundry. Orchestrated by DJ tech magicians, Tethra64 (Teth) and Coolaidhippy (Cooly), METAVERSE will entertain, engage, and enlighten, while also serving as a stage to unveil the creative duo’s first indie video game they developed and designed, “X2: The Next Power.” METAVERSE spins a sorcerous show of sound, light, and pure tonal imagination – conjuring a new landscape of hope and wonder amidst the dangerous streets of this American city.

“I grew up in north Philly and my early influences involve the love of gaming and Japanese anime,” said Cooly. “Resident Evil, Soul Caliber, Bushido Blade, and Final Fantasy are some of my inspirations. And as I watched, I looked up to the way they valued friendships and love. Their determination and goals really inspired me as the type of person I wanted to be. Musically, those early soundtracks and YouTube-diving were my first introduction to mixing and musicology. It evolved over the years to experimental rap – conscious rap – freestyling at dance parties, mixing, and evolving. A DIY music-artist lifestyle with a lot of ambition. That eventually moved into real bookings and real earnings, and I’ve thrown music events at garages, warehouses, libraries, art galleries, houses, and small clubs all around different parts of Philly.”

Teth added, “Being from Wilmington, it’s a lot harder to gain any type of following in a smaller city with less opportunity. Despite the hand I was dealt, I was still able to make a significant amount of noise in my own city, starting in 2015, and that’s how I ended up linking up with Cooly and R1. Since then, we just been trailblazing. Especially when I created Blast Music. That’s when we knew we had a unique sound that we could push as a group. We really started from whatever makeshift house or venue around Philly we could find, and ended up doing raves with over 2000 people. It’s such a great feeling, starting from humble beginnings to now being able to present our official debut event with Metaverse.”

Exponent Presents: “METAVERSE” with Tethra64 and Coolaidhippy @ The Foundry

METAVERSE is a virtual reality music event where users can interact with a whole other digital world. It is completely next-level – science fiction made science now. And it marks the worldwide debut of “X2: The Next Power,” a newly developed 8-bit indie game.

Tickets for the event are currently on sale via Ticketmaster. For up-to-the-minute news on the concert or to learn more about the artists involved, follow Tethra64 and Coolaidhippy on social media: @coolaidhippy @tethra.64